The need to use up the last of the year’s vacation days, and J having weekends off for 6 weeks led to taking a Saturday night off to spend together. That meant 2 days of brunches!

We decided to go to Rochester for the night, but before we left Buffalo, we had brunch number 1 at Patina 250 inside the Westin Hotel. They didn’t list a bloody mary on their brunch menu, and who does that?! With a full bar though, of course, they could make one.

Even though it looks like a pint glass, it wasn’t, and for $11 I felt cheated. It was fairly small and as you can see, not mixed very well. I forgot to ask for it spicy, but arrived with a good amount of heat. The main flavor of the drink was pepper, and a lot of it, with a decent amount of celery salt. It was fairly thick, but after getting it properly mixed up, it was pretty decent. 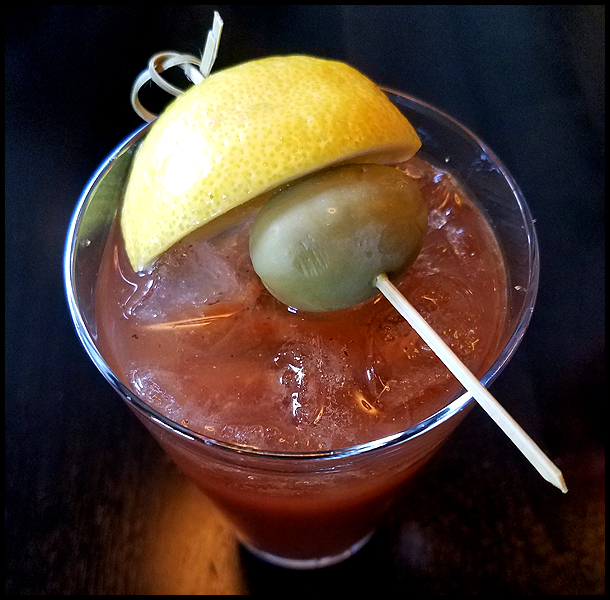 We had a fun night out in Rochester, seeing some music and checking out a neat bar called The Spirit Room. The next morning we checked out of the hotel and made our way to Blu Wolf Bistro. I left J in charge of finding us a brunch spot and this was his pick. If it sounds familiar, it’s because they were one of the participants in the Rochester Bloody Mary fest. Their offering was the green bloody mary with the crawfish in it! I was a little scared that their normal brunch bloody would be similar but I didn’t need to fear. 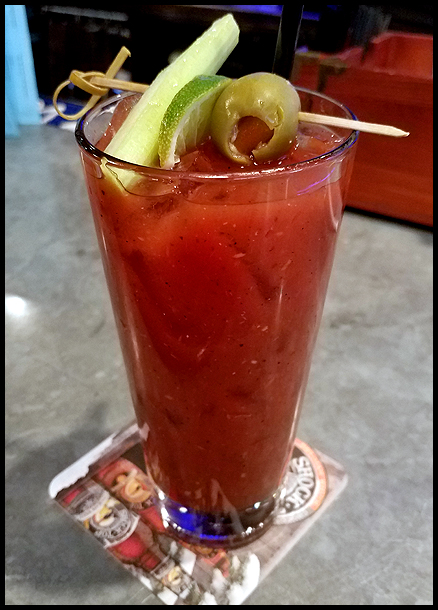 Blu Wolf is a busy brunch place that offers buy one get one Bloody Mary and Mimosas (and you can mix the 2, but you have to pay for the more expensive one, no big deal.) Their menu had a ton of good looking dishes, but we both opted for one of the hangover bowls (it was appropriate ha!) 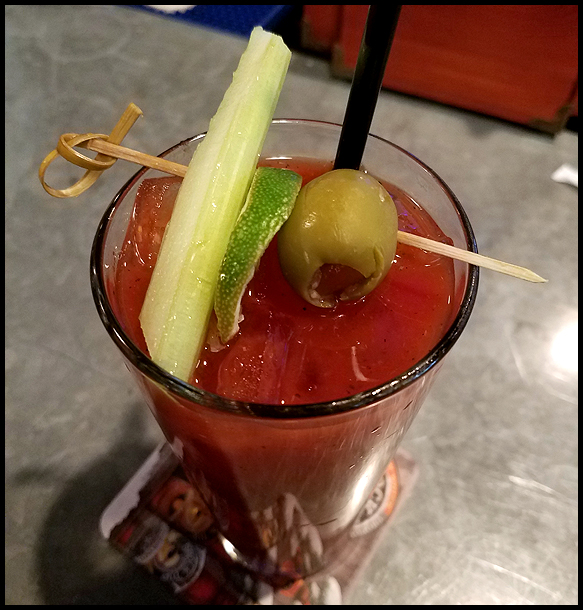 Nothing staring at me this time!

Their standard bloody mary had a nice horseradish flavor, but wasn’t overly spicy otherwise. And that’s ok, since the drinks are made from a big jug of mix to keep up with demand, and you have to cater to the non-spicy brunch crowd. You could probably ask for added spice, but I only had the one so I can’t say for sure. Garnished with a pickle, olive and lime, it was a good classic offering.

**
Step Out Buffalo hosted a Makers and Shakers, Boozy Artisan Market yesterday, which featured unicorn mimosas and a bloody mary bar. It was a $5 entry fee, and then $10 for the drink, so after seeing the super long line I passed. The garnish offerings looked pretty decent, if running low, and I did see some shrimp around in other drinks so it may have been worth if if you loaded up on stuff. Maybe next time!

I can’t remember if I had mentioned it in previous posts, but Step Out Buffalo decided to ply their trade in Bloody Mary Fests down the thruway in Rochester. I’ve posted at least one drink I’ve had in Rochester, but despite having several friends there, and going to college half hour away, I have not spent all that much time in the next big city down the canal. When the Rochester fest was announced I bought tickets right away, put in for a vacation day, and made plans to have a great afternoon.

The fest was held in the Main Street Armory, which turned out to be SOB’s best venue yet – a big open space that could set up the bars with enough space to accommodate the crowd, with the other vendors in the middle. There was room to walk around and there weren’t big lines running into other big lines, which made for a much more pleasurable experience than Buffalo’s fest at Riverworks this year. 10 Rochester bars participated, and it was the same format as the Buffalo fests – one ticket per bar, and vote for the best overall, the best garnish, and most creative. They scrapped the fancy online voting they used in Buffalo for good old paper ballots in fishbowls, guaranteed to work (since I wasn’t able to get the online vote to work in Buffalo, this was a good change).

After tickets went on sale, SOB decided to offer designated driver/bloody mary hater tickets for $5 like they did for the first Buffalo fest, so I got one of those for J, leaving me with an extra regular ticket. I knew that someone I was friends with in Rochester liked bloody marys and finally I realized who it was. Nan! So I invited her to join us, and we had a great time.

So in the order in which we tasted them, I present the Rochester Bloody Mary Fest (all vodka once again provided by Tommyrotter Distillery): 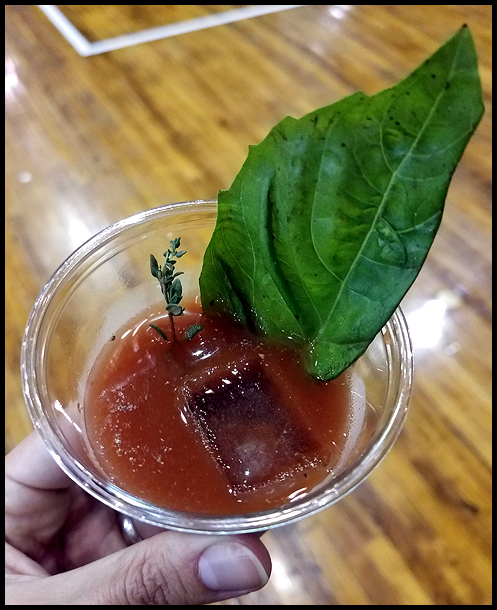 “Blood Runner” by The Revelry

The cucumber taste was immediately noticeable, so for me that’s usually a no go. That said, it wasn’t too bad. It was definitely the spiciest of the 10 offerings, and it had a good balance of salt to the other flavors. It may have been Nan’s favourite. 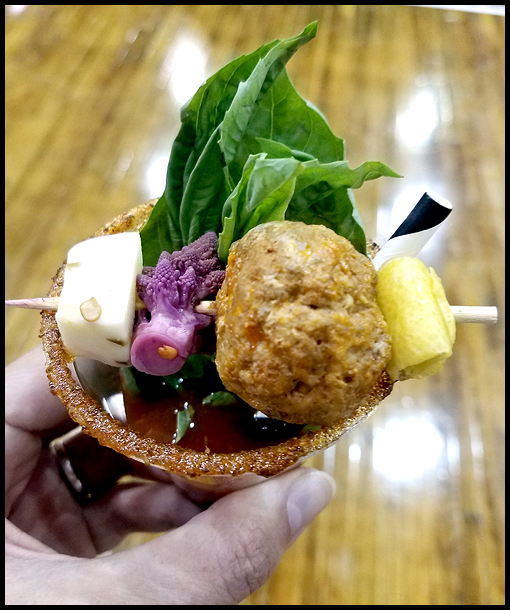 If there was an award for prettiest Bloody Mary, Orbs would win. They just looked gorgeous. I liked the meatball, it had some spice to it, but the drink itself was primarily flavored with horseradish. It was quite strong, and the mix was very sweet. 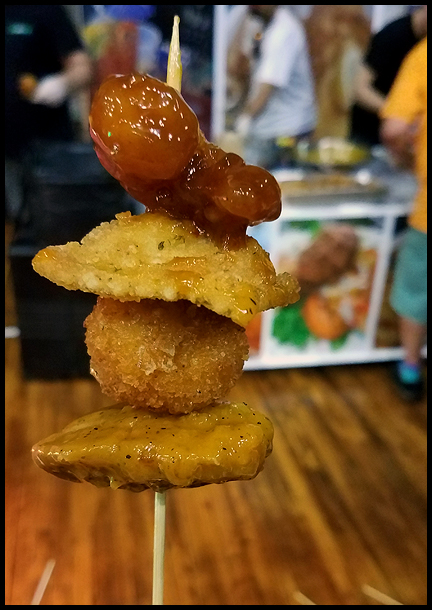 Holy Garnish for a fest! 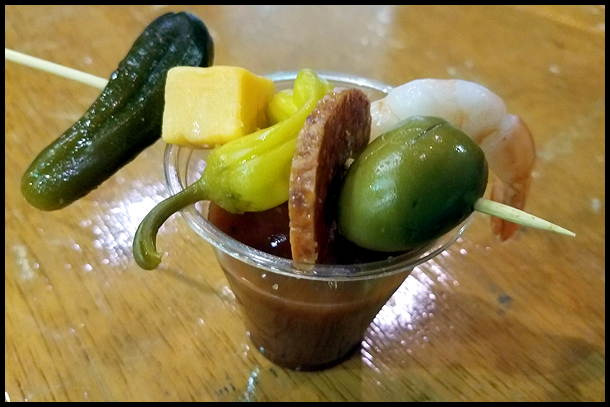 The Boat House definitely had the biggest garnish (but not the craziest, stay tuned) at the fest. J took the Thai shrimp on the skewer, and the plain shrimp in the drink and he said the Thai shrimp was delicious. We had eaten before we left Buffalo, so I wasn’t hungry, and add in all the drinks and I couldn’t finish my garnish. The drink was very sweet again, with a good tomato taste, and it was better than just plain Mr and Mrs T’s. Their sign mentioned 2 other garnishes, a Hawaiian Shrimp skewer with the Thai shrimp, blackened shrimp and pineapple, and an antipasto skewer with spinach artichoke crustini, but I don’t think they were serving either of them. Everyone had the skewer that we got. 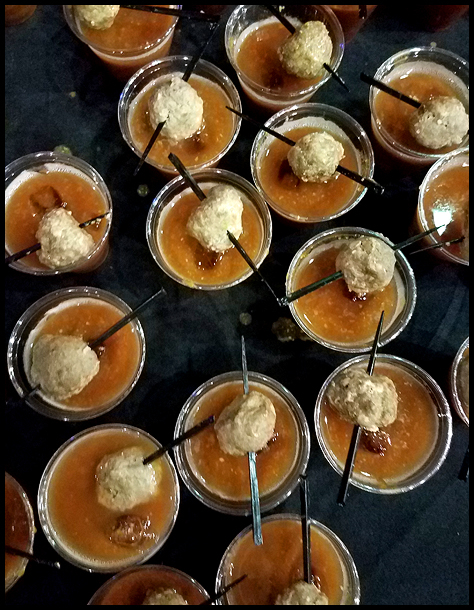 Like Orbs, the Cub drink’s main flavor was from horseradish. It was a bit watery, and despite the long list of ingredients on their sign, it didn’t taste like much. I don’t know how that’s possible, now that I’m looking at the list, but it really didn’t have a strong flavor and I didn’t find it spicy. The meatball was a classic style meatball, and wasn’t bad. 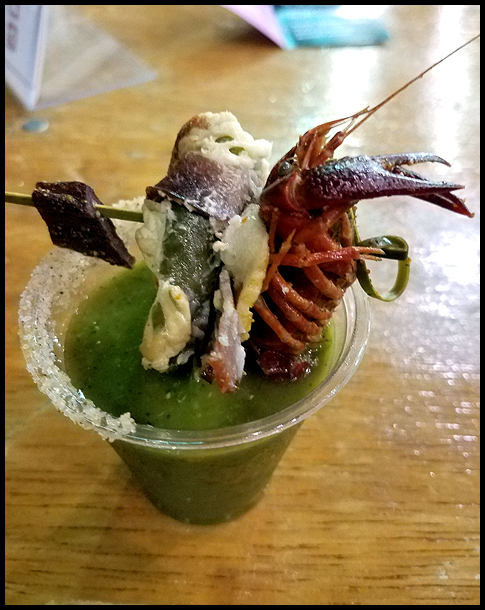 “The Celtic” by Blu Wolf Bistro

And the award for most horrifying Bloody Mary goes to *drum roll* Blu Wolf Bistro!!! IT’S STARING AT ME!! IT HAS 8 LEGS and CLAWS!!! Holy crap. I can handle peeled shrimp, but not ocean critters that still have their exoskeletons on (plus a friend once told me crawfish taste like garbage). I was never going to eat it, but had I wanted to, I wouldn’t even know where to start! As for the drink, it was the first green bloody of all the fests. It had a half spiced rim, and itself had a good amount of spice. It was a tad thick, and I can’t say I loved it. It was strong on the tomato flavor, where as my homemade green mix made mostly from tomatillos was tart and better in my opinion. This mixture might be better suited for a gazpacho. 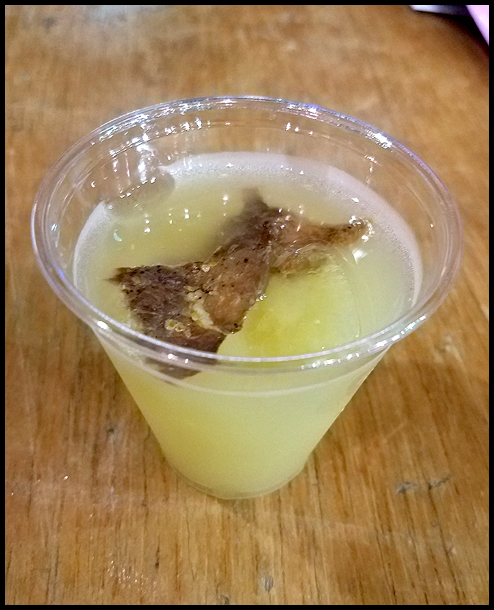 “Not So Bitter Bloody Mary” by Bitter Honey

Right after the first one, we had another green bloody mary. This one made entirely of tomatillo, I find it hard to consider it a bloody mary. It was delicious, but it tasted like lemonade. It was fruity and sweet, not at all savory even with the meat chunk. I couldn’t detect any spice to it, and maybe they ran out, but the only part of their listed garnish that we got was the lamb jerky. It was refreshing, and I had a 2nd one before we left to reset my mouth from all the tomato, but if I had ordered this expecting and really wanting a savory bloody mary, I’d be sad. It’s totally marketable, but just under some other name. 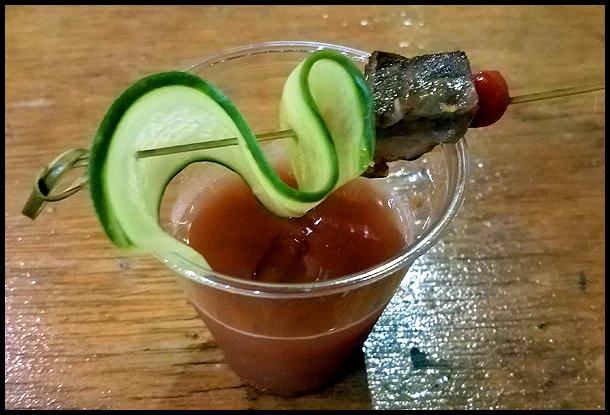 “Belly Up” by Roam Cafe

So even though this drink had an evil cucumber garnish, it was my favorite of the fest. They made the entire mix fresh from scratch with all local ingredients, and you could tell. It tasted nice and fresh with a good balance of flavors. It tasted a bit meaty, and it didn’t have a ton of spice, but it was a solid offering, and it was my vote for Best of Rochester.

Having just had Black Button’s mix at their Buffalo location, I don’t have much else to say about it. I still don’t love it, and I still can’t quite pin point why, except for the cucumber. If you want more, check out the full review. 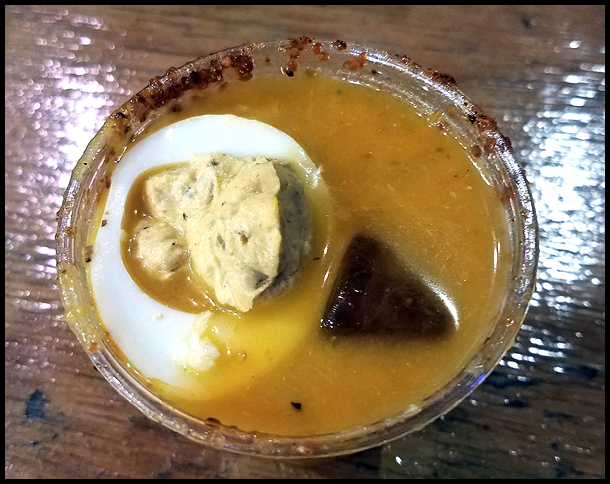 I feel like I would have enjoyed this one more had I drank it earlier in the fest, as by the end you get pretty tired of drinking bloodies (yeah, I know!!). It was a thick orange color and featured a deviled egg that was nicely flavored, apparently with chorizo, but I thought it was from chili powder. The drink itself had a smoky flavor, as if from smoked paprika, but that wasn’t in the ingredients list either, ha! It wasn’t very spicy, but it had a decent flavor. 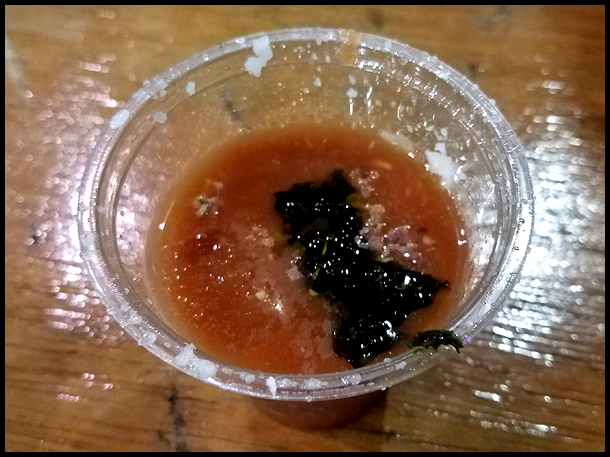 Sourced from all local ingredients, and smoked this one was a close 2nd on my favourite list from the fest. They use heirloom tomatoes, and while it smelled smoky, it didn’t translate into the drink too much. It was spiced from the horseradish, but I didn’t get much pepper spice from the Tabasco. It might have had too much salt, but it could have just been salt that fell into the drink from the rim. I would do without the kale, as the chip didn’t hold up and just got soggy, and then got in the way of my drinking.

As a whole, Rochester had a great bunch of bloodies to offer. I liked that it was an open space with room to move, but they didn’t have the “distractions” of the Buffalo fest, like the pinball or craft groups. They had a photo area with props, but no dedicated photographer taking photos there, just people using their phones. If SOB combines the larger space of Rochester, with the added fun of Buffalo, next year’s Buffalo fest could be the best yet! 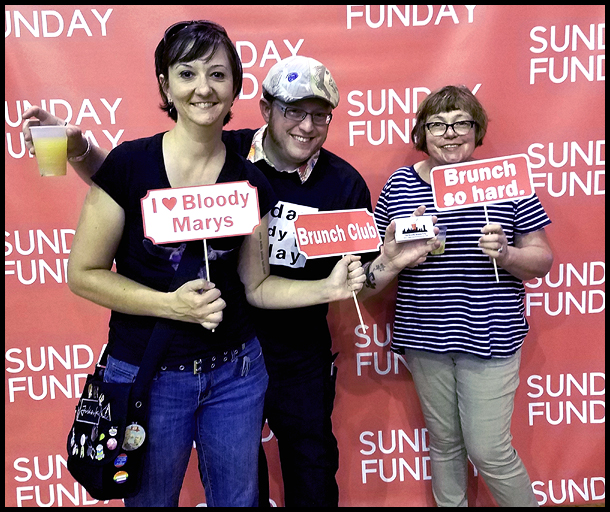 Until next time, Cheers!

Jason and I took a night trip out to Rochester, NY to catch some music at Sticky Lips BBQ and meet up with my old friend Eric who lived near by. Everyone talks about Dinosaur BBQ when they talk about BBQ and Rochester, and no one ever talks about Sticky Lips but this was our 2nd time eating at Sticky Lips (now at both locations), and they are fantastic, and I dare to say, better than Dino. I don’t know if Dino has a Bloody Mary or not, but Sticky Lips does. 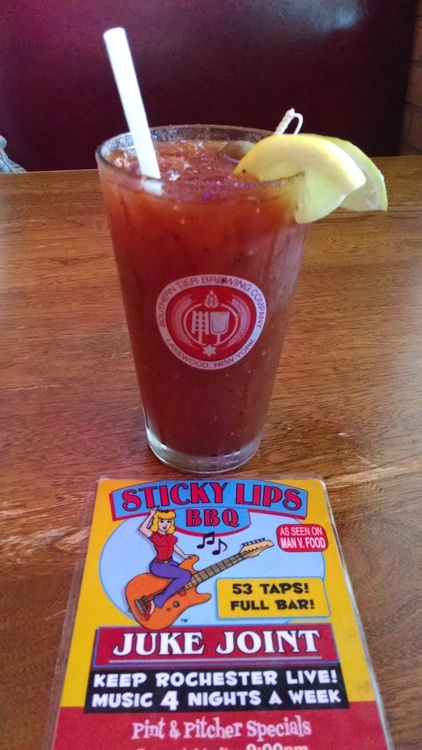 Made with Absolute Vodka, and served in a pint glass for $5, this Bloody had visible pepper and horseradish for spice. The spice level was nice, and was immediately evident but didn’t linger. It was garnished with lemon, lime and 3 olives and had a good standard taste. It was a tad liquidy but it wasn’t really an issue.

I can’t remember what we ate this time, but it was delicious and we were stuffed. We definitely would pick Sticky Lips over Dino for our dining pleasure when in Rochester, especially now that we finally have a Dino in Buffalo.