It was vacation time again! This time it was our “big” trip out west to Tucson and Phoenix. The primary impetus for the trip was the Arizona Taco Fest in Scottsdale. I was supposed to go a few years ago with a friend, but it didn’t work out, so it remained on my list of things to do. Also on my things to do – see inside a missile silo – and Tucson generously provides that opportunity!

Now if you’ve followed along with my vacation history, you’d know that every time I take a vacation it rains. Well this time we were going to the desert, no worries about getting rained on. WRONG. *sigh* We flew into Phoenix and drove to Tucson that night. The following day there was rain predicted, so it was cloudy and we got sprinkled on while visiting Biosphere 2, but it wasn’t bad. Actually, to me, it was quite nice because I don’t mix well with hot weather and sun, so with temperatures in the 80s but no sun beating down on me, I found it to be pretty great. However after the missile silo tour, on our drive back to Phoenix, our plans of going to an Ostrich farm and seeing something called a “goat penthouse” (!!!) were destroyed by big storms, and wind, and dust. Ugh. We also had to skip seeing the weird Domes of Casa Grande. The storms continued on our drive to Scottsdale, but cleared up in the evening for a while. Saturday we toured the beautiful Taliesin West, then visited the Goldfield mining tour tourist trap, where it rained on the drive. Sunday was Taco Fest where it stormed towards the end with a ton of lightning (and it actually made national news for the property destruction). Monday we visited Papago Park and the zoo, where we DID NOT GET RAINED ON, however it rained that night, as well as the next day before we left for home. UGH!

We’re doomed. If anyone wants to pay for us to visit California to help out their drought situation, email me!

I had done my typical googling of “Best Bloody Marys in _______” before leaving, but there wasn’t that much on the intertubes, and what I found all tended to be brunch drinks, so I wasn’t expecting to have any while we were there. But while walking around the 4th street area of Tucson we passed a bar with a bloody mary advertised on their chalk board. Score! 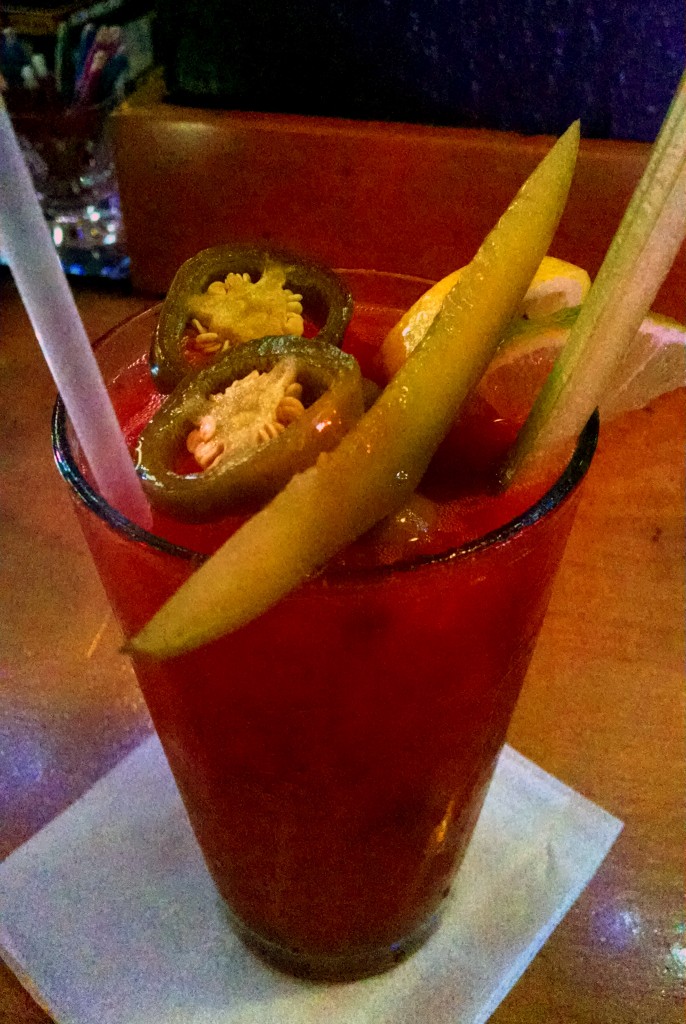 Man I can’t wait to get my new cell phone, maybe then photos will look better.

Che’s Lounge in Tucson had this on offer. A pint glass Bloody Mary, garnished with a lemon, lime, celery stalk, olives, a sweet pickle and jalapeno slices. I asked for it spicy, and the bartender went to town. Wow. Very very spicy with definite pickle juice added. It kept a good tomato flavor in all that spice and pickle. I missed watching it being made, but there was both sriracha and Tabasco on the bar, so my guess is he used both, plus maybe more because my tongue was ON FIRE. All in all a good outing.

One place I had made note of to visit was the Cup Cafe in The Congress Hotel in Tucson, so we caught breakfast there before going to the Biosphere. It only sprinkled on us while we ate outside… 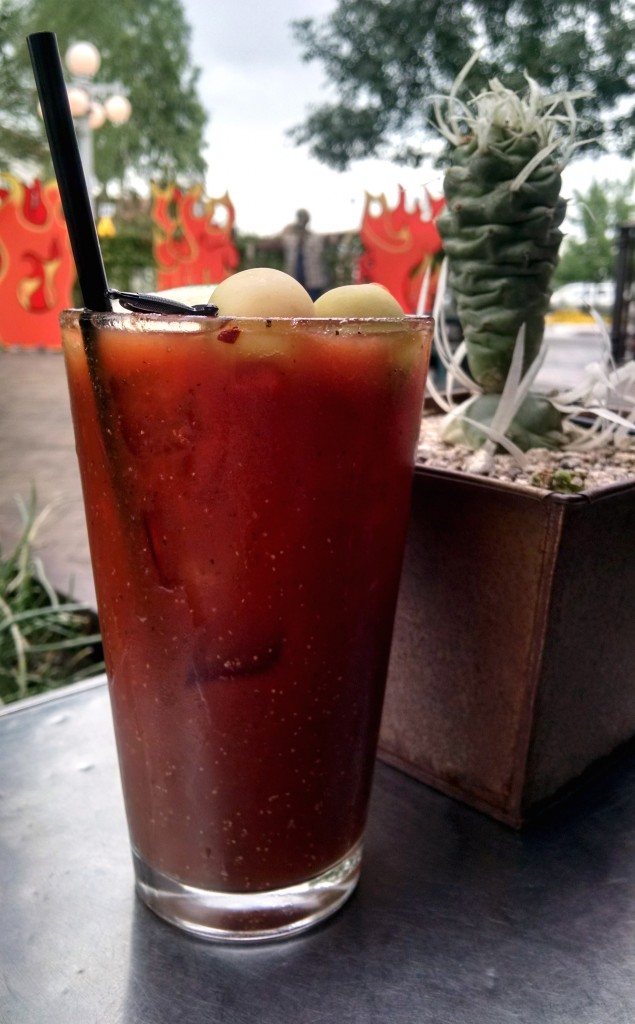 The Cup Cafe, where it only sprinkled on us

Served in a pint glass with 2 olives and 2 slices of cucumber…Cucumber…one of my arch-nemesis foods. I haaaate cucumbers. Thankfully the drink didn’t end up tasting like cucumbers. I believe it was a house made mix, and you could see seeds and hot pepper flakes inside the glass. Even with the flakes, however, it wasn’t very spicy. There was some bite from a bit of pickle juice but it was very slight. It was tomato-y and drinkable but not spectacular. I’d take Che’s over Cup’s any day.

I also had 2 drinks in Phoenix, the first one from The Vig, which was also my first make your own Bloody Mary bar!!

Our bartender the previous night let us know about The Vig’s brunch, which featured the make your own bar, so after realizing we could still make brunch after visiting Taliesin we headed out to the Arcadia neighborhood.

For $4 you got your pint glass of vodka and access to their Bloody bar which included 2 mixes, 18 bottles of hot sauces, and various spices like smoked paprika and chipotle powder. Garnishes included your typical lemons, limes, and celery, plus pickled beans and asparagus, pickles, and bacon. One of the mixes looked fairly plain, whereas the other had seeds and bits of pepper so I used that one. 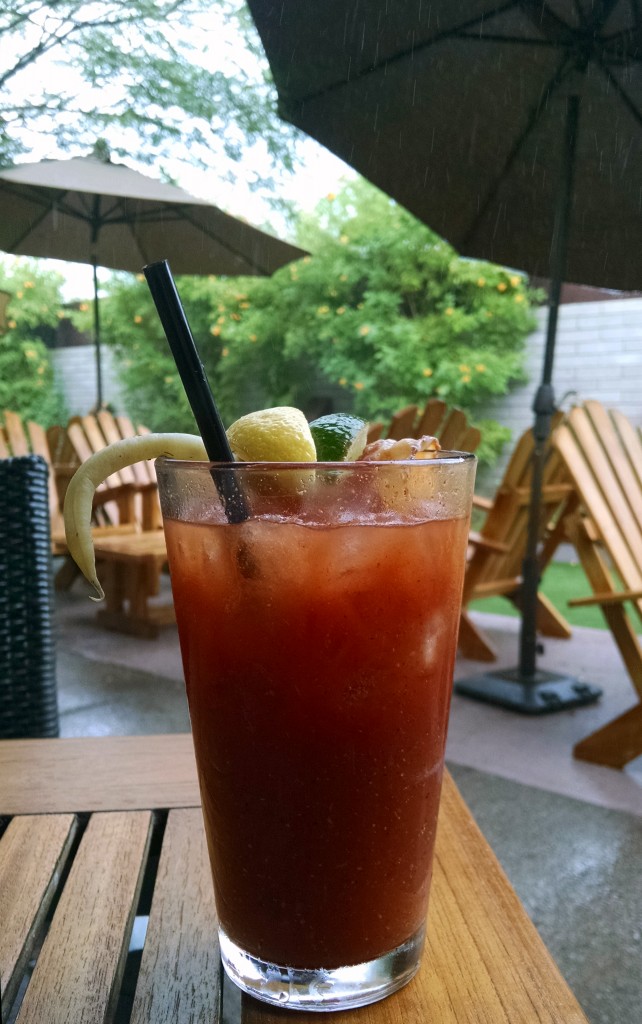 I added some chipotle powder, and a green jalapeno based hot sauce to the mix. Threw in some lemon and lime, a few pickled beans, and a strip of bacon. I wouldn’t necessarily say that my concoction was fantastic, but it was fun.

The last drink I had was at The Duce. I had found this multi-media bar on a list of things to do in Phoenix, and it turns out it was featured on Diners, Drive-ins and Dives on the Food Network. The Duce is a bar, restaurant, boxing gym, and clothing store with shuffle board, corn hole, ping pong, a dj, sports on tv, a soda fountain and chess. Yeah. Multi-media. It was a very fun looking place with a lot of things to do, from just sitting at the bar and having a drink, to playing games, and it was family friendly with a lot of different aged children running around. They served food from an old silver trailer, and I had their famous “mac n cheese muffins” which were fun and tasty. I wasn’t expecting to have a Bloody here, as we really just went to see what it was about, but they had a fancy drink menu that featured the Bloody I had and also the Bloody Schlamm Hamms – a bloody made with Schlitz and Hamms beers. 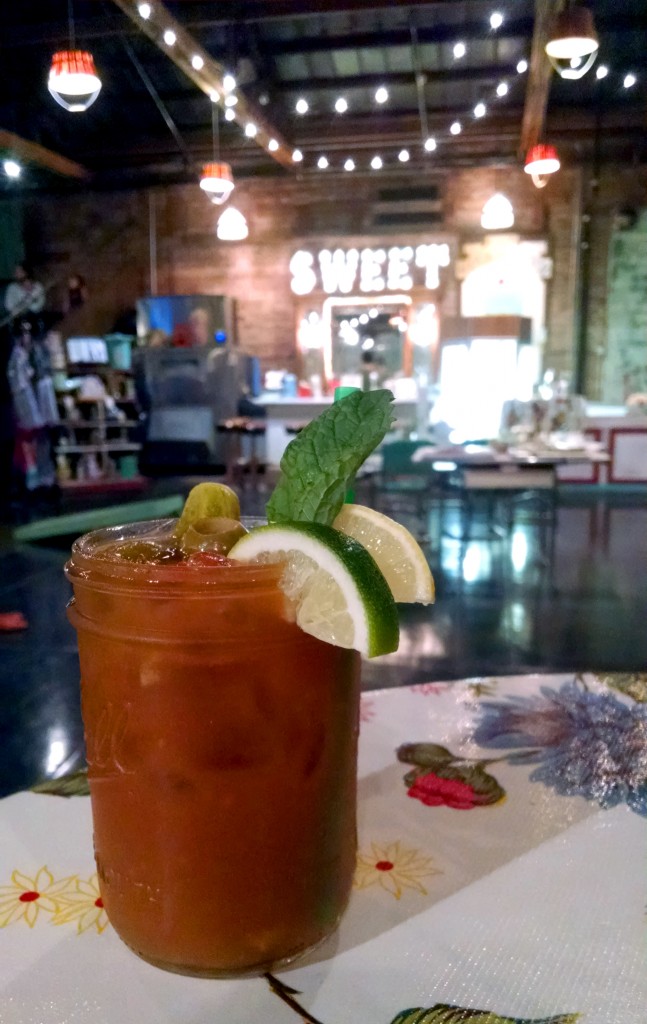 $12 and served in a mason jar, the drink was made with a local homemade mix and featured organic vodka, organic lemons and limes, olives, a pickle and a mint leaf. The mix was pretty liquidy while still having chunks of pepper in it. There was a hint of garlic, and a bit of pickle juice flavor and mint, and it was spicy without having asked for it. It was quite good, but it was $12… 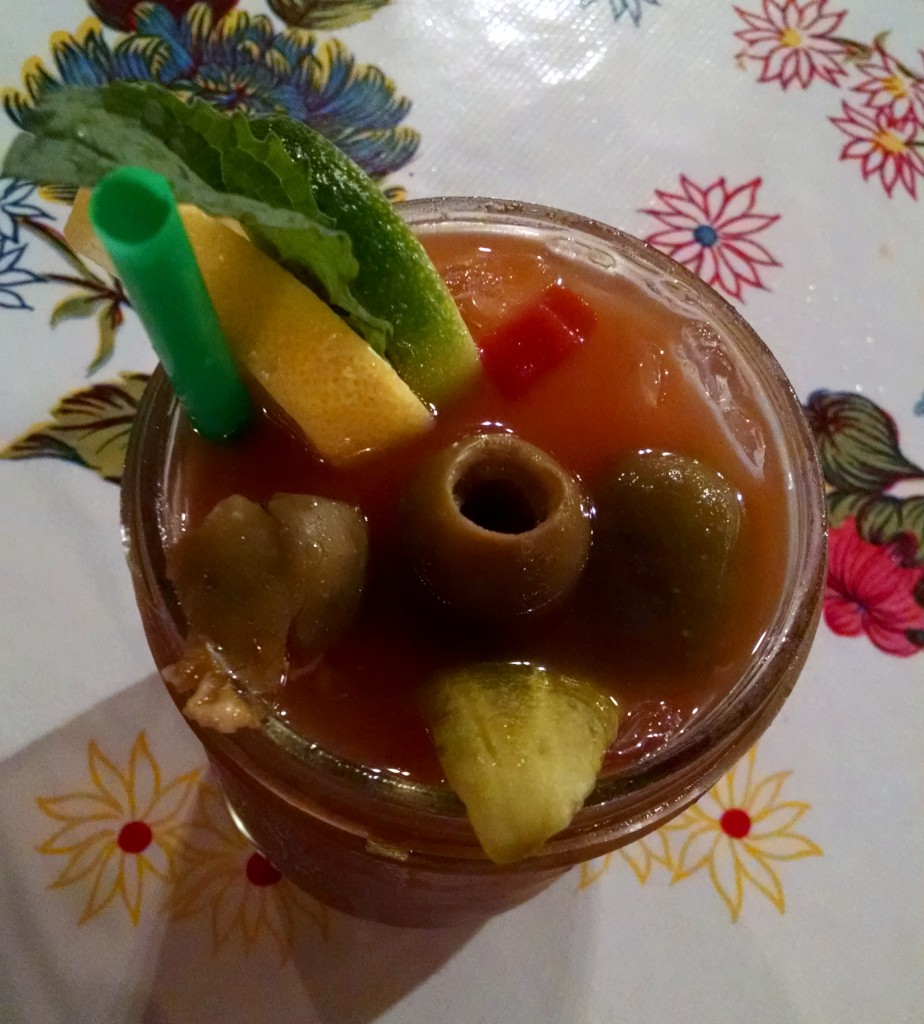 Now I have been known to spend a bit of money on a Bloody Mary but The Duce was a bit too much for me. I’m fine with craft cocktails being $9 or $10, but when I have to break a $20 every single time I order a drink, that’s too expensive. Add to that the fact that in Arizona, tax isn’t included in the price, so it was even more than the price listed on the menu. I just wasn’t used to that. In NY an $8 drink is an $8 drink. Then the clothing store featured army surplus items turned fashion for ridiculous prices. A white thermal shirt with black dye on the bottom for $137? No. Just no. At least the games were free.

The Duce was very fun, I kicked J’s ass in corn hole – my best corn hole game in years, but if I lived in Phoenix I just couldn’t afford to hang out there.

I wasn’t able to catch a green Bloody Mary like the one offered at Windsor before heading for home but that’s ok. Have to leave something for next time right?

We headed home after 6 days away, and came home to…*drum roll*….rain.