Last October we headed to Arizona for the Phoenix Taco Fest, and this year we decided to go down to Pittsburgh for their first Taco Fest at Hop Farm Brewing Company. Because who doesn’t like tacos? (Admittedly, I did not like tacos or Mexican food until the last 10 years. But you can forgive a child for not being an adventurous eater, right? Now, I’d say it’s probably my favorite style of food.)

I contacted a friend in Pittsburgh to let her know that we’d be in town, and she sent me a photo of a wonderful looking, massive bloody mary, and plans were made to meet at Twelve Whiskey Barbecue for brunch. 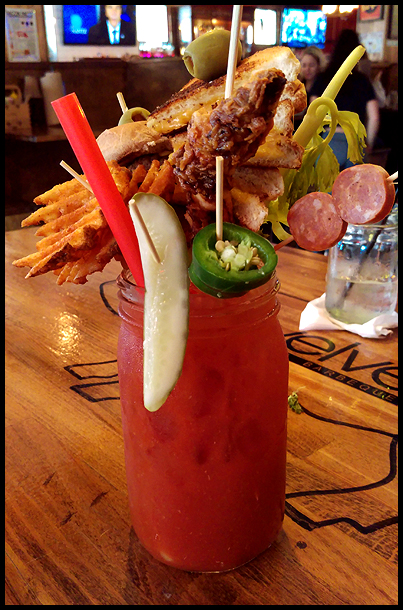 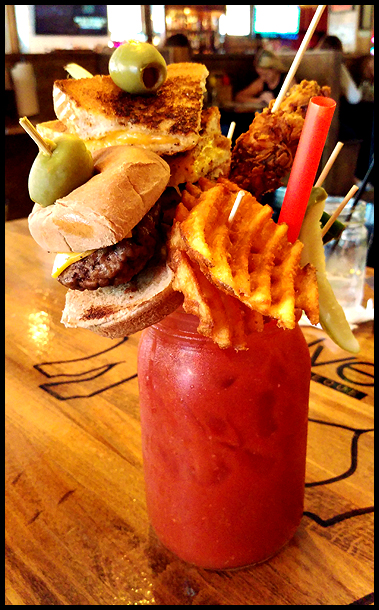 A different view of the magnificence.

Presenting the Big Azz Bloody. Where do I even start with this thing? Well let’s start with the price. $15. $15!!! For all of that!!! That seems totally completely reasonable! Considering I didn’t need to order any food to go along with it (well I ordered 2 fried eggs because it was breakfast and all), it was a cheaper brunch than usual all things considered.

Served in a larger than normal mason jar, this thing was loaded with goodies. For the big stuff, there was a full grilled cheese cut into 4 triangles (as it should be!), a chicken finger, a slider, and waffle fries. For the little stuff, there were 2 slices of sausage, a pickle, olives, jalapeno slices, a celery stalk and cocktail onions.

A close up look.

I was really so overwhelmed by the garnishes, that I don’t have a lot to say about the drink itself. My immediate reaction to the first sip was that it was very tomato-y. There was a bit of spice to it, and it was definitely drinkable. (They also offer an ordinary bloody mary that I would imagine contains the same mix.) As expected, putting hot garnishes on a cold drink, they did not stay warm, but that’s ok, they were all good.

I am almost sad that the drink was such a meal, because I’d have liked to try some of the dishes on their brunch menu, but I just knew I would not need to be eating anything else with this massive cocktail. And as it turned out, by the time Taco Fest rolled around later that afternoon, I was still not hungry, so add that to the rain (because, of course), and long lines at the event, the fest wasn’t that exciting. :/ I managed to stuff some tacos into my face, and they were decent, but by then it really started to pour so we just couldn’t enjoy it. There is potential there, as every Taco Fest has potential, but it just didn’t do it for me this time around.