I have returned from St Louis, unscathed. The trip was a bit touch and go for a moment, as the verdict in the Michael Brown case was initially going to come in the day I was traveling to the city, and some…trouble…was expected, but the verdict was postponed so, game on!

I was going to post from the road, but it seems the tumblr android app does not allow for posting photos inline, so I decided to just save it all for when I returned.

I had some free drink tickets for Southwest Airlines that had expired in December 2013 that I brought along with me, because I figured it couldn’t hurt to ask if I could use one. They’ll say no, and I’ll have my water and continue with my craps class homework, or they’ll say yes and I’ll have a dreadful Bloody Mary. At first the flight attendant said no, but on second thought, I guess because I did ask, she said yes, and took all 5 of my tickets in exchange for one Bloody Mary. 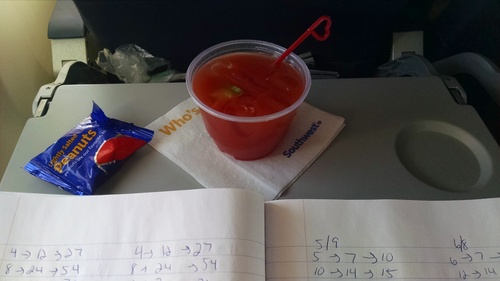 There we go! An airplane Bloody Mary. Made with Mr and Mrs T’s Bloody Mary mix and Finlandia vodka with a lime garnish – a bigger slice of lime than you get in most bars. It was pretty dreadful of course. You have to be pretty desperate to order one on an airplane, but I figured it had to be done for the sake of the website. It was pretty damn strong though and gave me quite the headache almost immediately.

My aunt and uncle picked me up at the airport, we caught some dinner, and in the evening headed to the first destination on my list of Bloody Mary bars I wanted to try while I was visiting. I had googled “best bloody mary in St Louis” and Sub Zero came up. Voted the best vodka bar in America, they have the largest selection of vodka in the country and boast a menu featuring all sorts of creative cocktails and several different kinds of Bloody Marys.

They don’t make their own Bloody Mary mix, they use Zing Zang’s, but I had only just recently heard of this brand so I was interested to try it. They don’t seem to sell it around here, or at least not where I’ve looked. The best of list recommended their Pepper-infused Mary featuring their house made 4 pepper infused vodka. 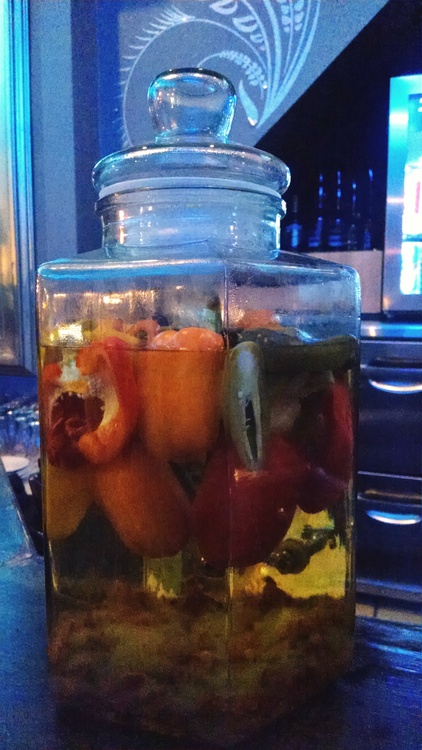 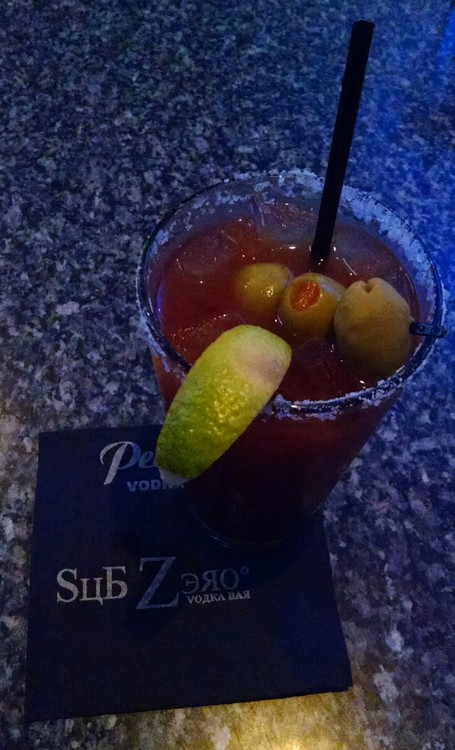 $9 in a pint glass with a salted rim. Garnished with 3 olives and a lime wedge. The Bloody had a strong celery taste and was very salty, and very pickle-y. It had a good strong spice level with visible black pepper. It was a bit thick and needed some chewing. It was good, but I didn’t find it mind blowing. I think the Bakon Bloody might have been a better choice, but I stuck with the Pepper-infused since the article had recommended it. If you go here you won’t have gone wrong, but I think I expected more. And if you like vodka, this is the place for you. They have a club which keeps track of all the different types of vodkas you drink, and you earn points and prizes including a jacket when you’ve tried all the vodkas they offer.

Before the night was over we also stopped into their favorite neighborhood restaurant, the West End Grill and Pub, for a quick snack and one more Bloody Mary. 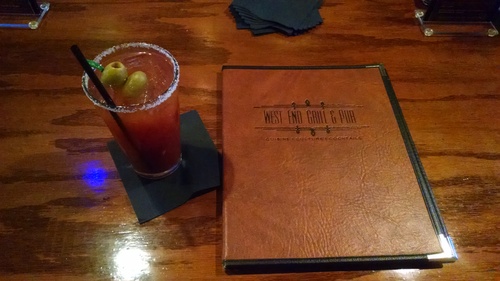 This Bloody was quite the opposite of Sub Zero’s. Served in a pint glass with 2 olives and a salt rim, the flavor and spice came strictly from horseradish as opposed to peppers or hot sauce. It was very liquidy, but not too much so, and since I like horseradish I found it to be quite good. I found a couple limes hiding at the bottom as well.

And so ends day 1. Stay tuned!