Day 2 brought us to the other restaurant from the Best of St Louis list that I really wanted to go to, Rooster. Rooster is a breakfast restaurant often voted “best breakfast in Missouri” as well as “best crepes, bloody marys and brunch in St Louis”. They were part of the Best Bloodys in St Louis list, and their menu offers 11 different kinds of Bloodys. I narrowed down the list to 3 or 4, and then down to just 2 that I felt like I just HAD to try. They make their own mix featuring 17 different ingredients, it has to be good, right?

So my aunt and I headed out to their new location on South Grand because it had longer hours than their downtown location, only to find out that their menu is different, and they didn’t have the one Bloody Mary I really had to have – the Bloody Fairy. And the bartender didn’t even realize the 2 locations had different menus. What?? Ok, fine, I settled for my 2nd choice, the Bloody Samurai. 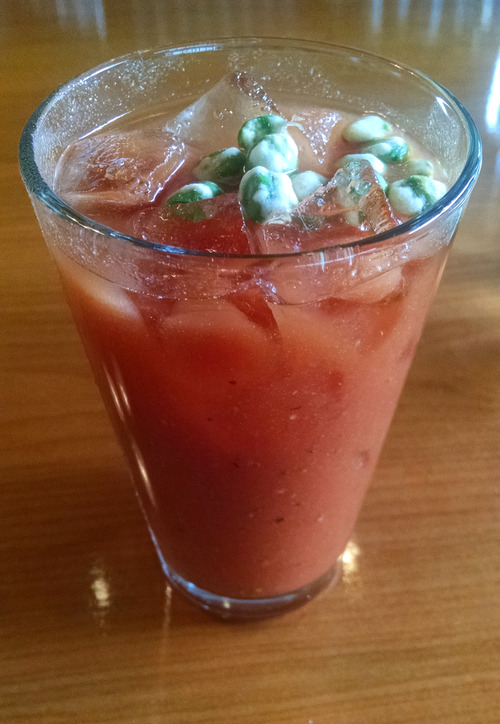 Made with wasabi, soy sauce and sake instead of vodka, the small size was $5 and garnished with wasabi peas! The photos from the Best Of article showed the drink also garnished with olives and peperoncini, clearly they were missing in mine. Perhaps a difference in location as well. My initial thought was that it was delicious, but then I thought it was a little weird. I think it was the sake, as in general I’m not a huge fan. The mix seemed to have a good taste, a nice spice level and good flavor from the wasabi (which I love). In the end, though, I thought it was pretty good. I had to get used to the difference in taste from the sake is all. 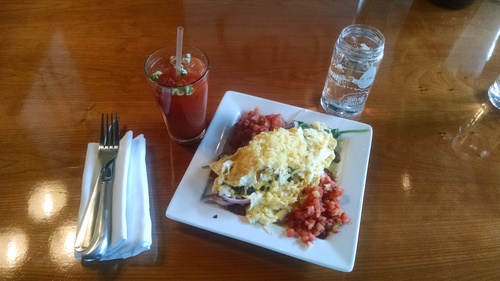 My food was pretty delicious too – a southwest scramble with eggs, black beans, spinach, cheese, onion and salsa.

My aunt and uncle recently moved to St Louis, which was the reason for visiting, but I planned it around a Buffalo Sabres game, which was on Day 2. So before heading out to the game we stopped into The Scottish Arms. My aunt knew they had a nice Sunday brunch with a make your own Bloody Mary bar, but being a Tuesday, they of course didn’t offer this. They did have their mix made though, however I was not ready for another one yet, but my aunt was, so she ordered their Smoky Bloody Mary. 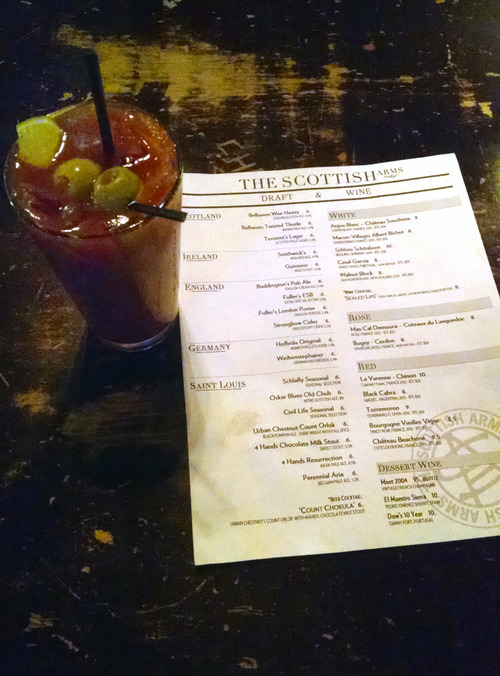 I did taste it, and it did indeed have a very smoky taste. Very Very smoky. And pickle-y. And very smoky. Did I say smoky? Served in a pint glass with 2 olives and a lime garnish for $7. It was smoky. Haha.

The Buffalo Sabres lost. Badly. Of course, because they are terrible this year. And that’s ok. One game closer to McDavid!