J and I returned to New York City again, to see Hedwig and the Angry Inch…again…We couldn’t help it! They announced that Michael C Hall was going to be staring, I couldn’t miss that. And then, of course, they announce that the original Hedwig, John Cameron Mitchell himself will be returning to the role, so yep, we’re heading back again in March.

But that’s ok, I got to try a few more Bloodies. This was another quick overnight trip, and this time we drove so we didn’t have all that much time in the city, and not wanting to drive anywhere, we stayed in the general midtown area. I didn’t research any places to go ahead of time, and once we got there and I did some Googling, most places that turned up were brunch places, or not within walking distance.

The first Bloody Mary was courtesy of The Carnegie Club – a cigar bar. Blech! One has to make sacrifices for their others. 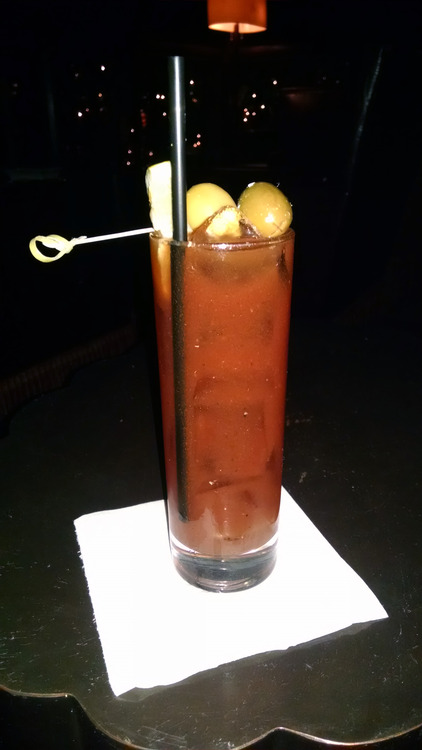 Pass. $12 in a Tom Collins glass. Garished with 2 olives and a lemon. It was plain tomato juice with some hot sauce. It had no flavor at all, but it did have a lot of vodka. The photo does look like it has some kind of seasoning in it, like pepper, but it really had zero flavor, so it might as well not been in there at all. No thanks.

After The Carnegie Club I was starving, so Google-ing “late night eats in NYC” brought us to Empanada Mama. Holy moly! A whole menu full of empanadas stuffed with all sorts of deliciousness. And they happened to have a Bloody Mary on the menu. I honestly didn’t want it, a margarita sounded much nicer but J made me. 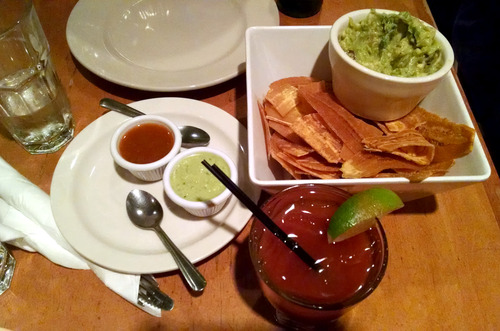 $7 served in a rocks glass. Garnished with just a lime. There was visible pepper and spice, in a house made mix. It was very tasty, though a bit chewy due to all that spice. It didn’t mix well, the spice kept sinking to the bottom and I had to stir it up each time before I drank any. It had a citrus bite to it and a good spice level, and I didn’t even ask for it spicy (I forgot and the server didn’t ask). It’s hard to pin point a specific reason why it was so tasty, but it was good. Though I still think a margarita would have been delicious 🙂

We also stopped into an Irish Pub across the street from the Belasco Theatre right after we left Hedwig, and figuring they wouldn’t have had a Bloody Mary, I ordered a Guinness. J then asked where we could get a good Bloody, and the bartender said they had one. And not just a crap one like you’d guess, but a house made mix. Color me disappointed in my Guinness, but I didn’t want to have another drink there. The bartender let us taste the mix, which had a lot of potential (although straight mix in a glass was like drinking Ragu haha). Perhaps in March we’ll have to stop in and try it (and figure out what the name of the place was).