I’m so excited. I was contacted by the CEO of Lava Bloody Mary Mix, offering to send me some of their mix to try! It arrived on Tuesday and was waiting for the weekend to give it a try. I had to bump it ahead of all those other mixes, or it would be forever until I got to sample it. I felt it was only right to taste it in a timely manner.

Lava, dubbed the world’s best Bloody Mary mix, is made from San Marzano tomatoes – said to be the best tomatoes in the world. (I tried to grow San Marzano tomatoes in my garden last year, and it didn’t go well. But I don’t blame them, none of my tomatoes grew well last year, tons of issues, ugh.) Handcrafted in small batches from a family recipe that has been refined over generations, Lava is non-GMO and gluten-free.

A 32oz bottle is listed at $14.95 on their website, so it’s a bit more expensive than your typical mixes. Is it worth it? 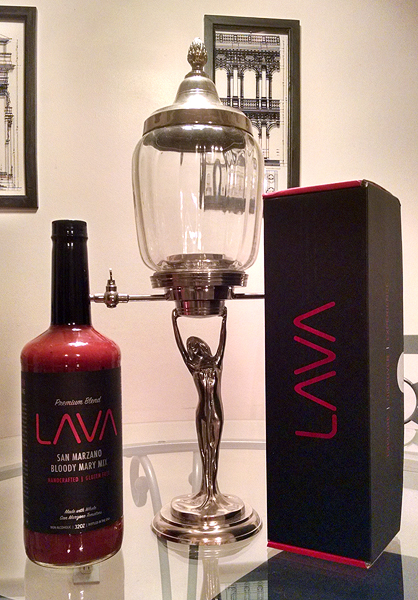 Well first of all, it comes in that fancy box. It’s really slick looking, but if it was on a shelf in a store, I’m not sure I’d know it was a bloody mary mix.

Secondly, and most importantly, this is one good mix. It just tastes fresh. It doesn’t taste fake or chemically at all, which is nice in a bottled mix. It’s a tad sweet, and I wasn’t sure if it was going to be spicy, despite the lava name, but it definitely is. You can see pepper visible in it, but it’s spiced with something else too, without any vinegar taste like you get from Frank’s hot sauce and other hot sauces. The spice lingers on your tongue, which is always a plus. It’s got a great liquidity, and if you’ve been paying attention to this website, you’ll know I can’t stand super thick chewy mixes. You can tell it’s not mass-produced, as the mix still has little traces of tomato pulp (for lack of a better word). It’s not pureed beyond recognition so it feels like it’s something you just made up in the blender for a special brunch. It’s really very nice, and I’d say worth the price. I would definitely buy it.

(I feel like I need to put in a disclaimer. They did send me a bottle to try, but I was not compensated for my review, and if it sucked, I’d say it sucked. It really is delicious.)

I’m back on my “special assignment” with the normal schedule so I have 9 more chances to get someone to go to brunch with me (since it’s definitely not happening this weekend, it’s St Patrick’s Day in Buffalo tomorrow!) Anyone, anyone? Bueller?