Bruuuunnnch! Finally! J and I woke up early enough that I was able to convince him to go with me to brunch. It only took 19 weeks of having weekends off to finally make it. I have 3 more weekends left, maaaaaybe I’ll get to another one before going back to overnights. 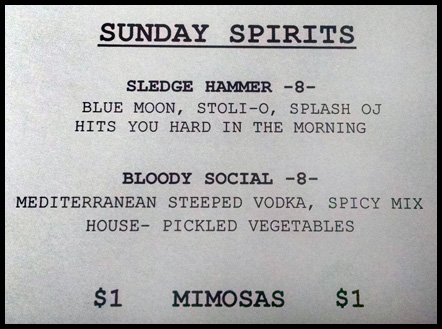 It took awhile to narrow down the options, but I finally settled on Providence Social. We had been there once before, late night, and I’m pretty sure I had a bloody mary but it was long before this blog was ever thought of and I remember nothing of it. Providence Social was also recently listed on a Best Boozy Brunches in Buffalo list, and it was open later than a few of the other options (because when I say we woke up early, I mean we were going to be ready to leave the house by 1pm at the earliest haha.)

Having never been to a bunch ever in my life, I wasn’t totally aware of how popular it was, and that you should really have reservations if you don’t want to wait. Now we know. They were busy, we waited about 20 minutes to get a table, but it was worth it. They have an interesting menu with many delicious sounding items, which made it hard to decide what I wanted to eat. 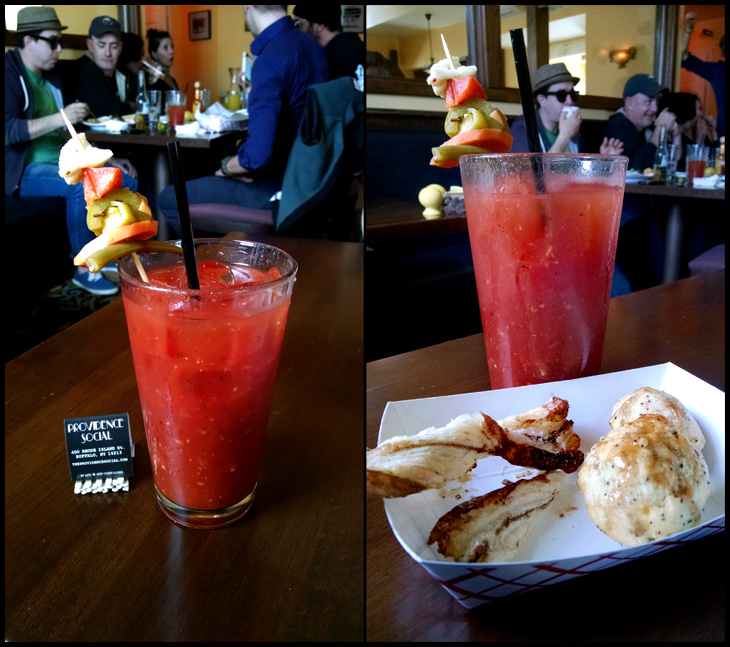 (Yes that guy wore sunglasses through the entire meal.)

Served in a pint glass for $8, their bloody mary comes garnished with pickled veggies, including green bean, carrot, jalapeno, red pepper, cauliflower and I think artichoke. The mix had visible horseradish and pepper providing a nice spicy bite which was not overwhelming. There was definitely pickle juice in the mix giving it a really nice flavor with a nice liquidity. One of the better ones in Buffalo for sure. 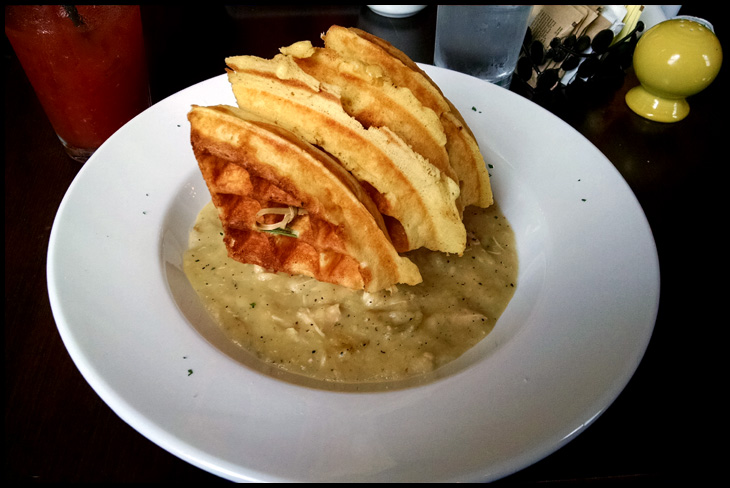 To eat, J got the bacon belgian waffle, and I went with the dip-n-chicken-n-waffles. It wasn’t completely what I expected, as I expected there to be actual pulled chicken, and not just chicken gravy with some bits in it, but it was still tasty. They also serve complimentary homemade mini muffins and cinnamon twists. Nice. It’s worth another visit, however with a list of other places I need to try, it might be awhile before we return for brunch again.