Hold the phone! Brunch 2 weeks in a row? Could it be?! Yes! We checked another box off the Buffalo Brunch list and made it to The Lodge to see what they had to offer. 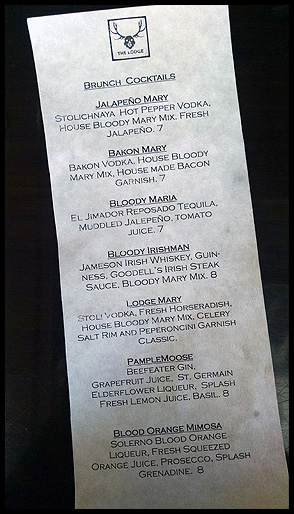 A whole menu of Bloodies! What to choose, what to choose? All their Bloodies are made with their house made mix, but feature different types of vodka (or other alcohol) and garnishes. I started off with the Bakon Mary.

$7 in a fancy glass, with lemon, lime, olive and house made bacon strip garnish my first thought was “Spicy!”. Even though it was made with Bakon vodka, there wasn’t much bacon flavor to it. You’d never know it was supposed to have bacon flavored vodka in it. The house mix had a nice taste to it, with visible horseradish and little to no pepper. It didn’t have a strong horseradish taste, nor a vinegary taste, like if they used Frank’s Hot Sauce, so I’m not sure where the heat came from. It was a little more liquid than most, but definitely drinkable.

I gave in and ordered the Jalapeno Mary toward the end of our meal. They replaced the bacon with a slice of jalapeno pepper, and the Bakon vodka with Stoli Hot Pepper, and this time you could taste it. It was definitely spicier than the first, with a strong jalapeno taste, and a hint of celery aftertaste that wasn’t evident in the Bakon Mary.

The drinks were good, but they weren’t spectacular. They get points for offering a menu of several types of Bloody Marys. If we return at some point, I’d stick with the Jalapeno Mary over the Bakon.

To eat, J ordered their Huervo Ranchero (spelled wrong surely), which looked really nice and tasted good too. I ordered the Chicken and Biscuit. It looked really good, and it tasted good, but the chicken was super, super tough, so it was unsatisfying. I should have stuck with one of the more regular breakfast offerings. 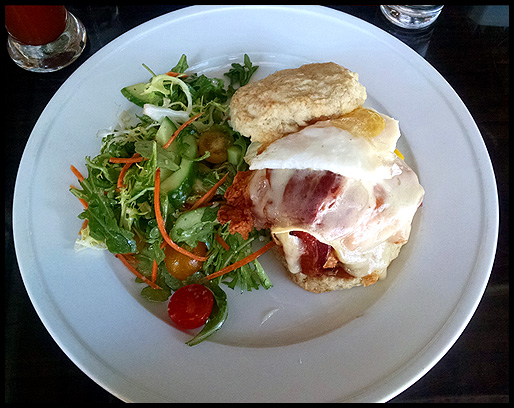 It was a beautiful day out, so we sat on the porch for a while soaking up some sun. J made me another Bloody from one of the many mixes we still have – McClure’s. 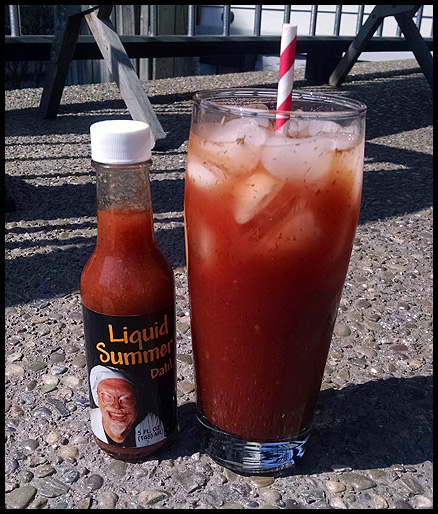 McClure’s is primarily a pickle company and boy does it show. Their mix, in this case the regular mix, is overwhelmingly pickle flavored. The mix is full of dill and chunks of something, probably garlic. At least I hope it was garlic. I bit into one and it was a little strange. I usually don’t mind a bit of pickle juice in my Bloody, it gives it some complexity but this was just too much. It’s like drinking the brine out of an empty jar of pickles. J had made the drink using Bakon vodka, and it still didn’t have a bacon-y taste. I’ve never tried the vodka straight, maybe it’s not supposed to be strong *shrug*. However, I don’t really see the point if it’s not strong. Somewhat unfortunately J had to buy 6 jars of McClure’s mix, so I have A LOT to consume. It’s going to have to get cut with something, maybe plain tomato juice, to lower the pickle content. If I can successfully cut it, it’ll be good.