We’re on vacation! And you know what that means…rain! And cold! J and I have been traveling together for 3 years now, and every vacation we take is so terribly timed for one reason or another that it’s getting a bit ridiculous.

1. Boston in May- flight out canceled due to ridiculous storms between Buffalo and Boston that could not be flown through.
2. New Orleans for Halloween – 3 days of extreme heat, then a 30 degree temperature drop while at dinner one night, making it too cold to go outside during the Witches Ball, and our flight home getting canceled because of Hurricane Sandy.
3. Las Vegas in January for a wedding – unseasonably cold weather which required mild winter coats.
4. Adirondacks for Memorial Day – 3 days of monsoon rain, the river we were staying along flooded, it was 30 degrees and 6 feet of snow fell on Whiteface Mountain. Our friend hadn’t brought any pants so we had to go into town to buy her some.
5. Chicago in the fall – required a winter coat and there were snowflakes.
6. NYC for Hedwig and the Angry Inch in May – flight home canceled due to storms between NYC and Buffalo.
7. Adirondacks for Memorial Day again – because it couldn’t be worse than the previous year. But then it rained again for 2 days. We hiked in the rain anyway, and at least it was warmer.
8. NYC for Hedwig again in December – ….actually, we had no problem with that trip, however we were so terrified of there being a problem and missing the show we drove instead of flew, since even if it was a blizzard I could keep driving and make it.
9. NYC for Hedwig AGAIN in March – drove through terrible sleet and snow to get there, then heavy snow through NY and NJ on the way home.

Bringing us up to this vacation. We had no real plans other than doing some outdoor activities around Buffalo, like kayaking, and the awesome Sky Ride (19 mile bike ride that includes a trip over the Skyway, super cool). But then we decided to go out to Seneca Lake and Watkins Glen tomorrow for a few days, and as soon as I booked the accommodations the weather forecast turned to crap. It’s like they knew, “Oh, Sara booked a trip, time to make it shit-tastic!” So we’re looking at temps in the 50s and rain at least Monday. I expect nothing less at this point.

Since the weather went to crap and it’s poured all day today, what better time to get brunch from a food truck! Cuz that’s how we do it when we’re cursed with terrible vacation weather luck. 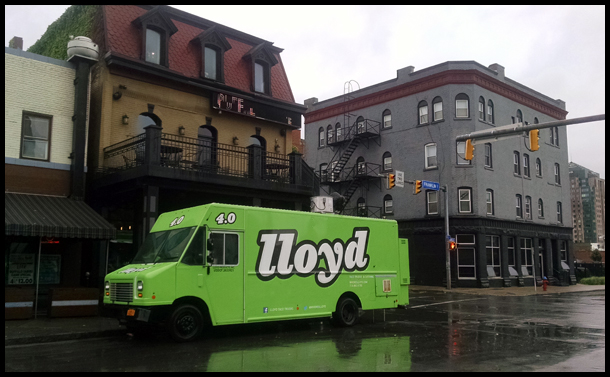 Lloyd Taco Truck was Buffalo’s first food truck, and I was so so SO excited when they opened up. I had only recently been introduced to the food truck phenomenon, and even though some people are totally grossed out by the idea of eating food from a truck, I thought it was great. But with Buffalo being truckless at the time, I had gone as far as Columbus Ohio with a friend, specifically to get some Mexican food from a truck. Then Lloyd appeared and it was glorious. 2 years ago work put me on special assignment downtown, where Lloyd parked each Friday, and the tomatillo pork burrito was the highlight of my week (especially when work was reimbursing my expenses!) Lloyd is delicious, and have since expanded to 4 (!!!) trucks, plus they appeared on an MSNBC show to win capital to start a brick and mortar restaurant, which is supposed to be opening this year. Because of Lloyd, the Buffalo food truck scene exploded, we might be up to 20 different trucks now!

Lloyd started advertising a Sunday brunch in conjunction with the restaurant Buffalo Proper but I didn’t really know how it worked. Buffalo Proper is fairly new, having opened in the old Laughlins some time last year. The menu is fancier than I usually eat, and they have an artisan cocktail menu that looks pretty good, but I had not been there yet. For brunch I assumed you ordered food from the truck and the restaurant was nice enough to let you sit and eat, while hoping you ordered beverages from them. But it was even better than that, which was definitely helpful today, with the craptastic weather and all. 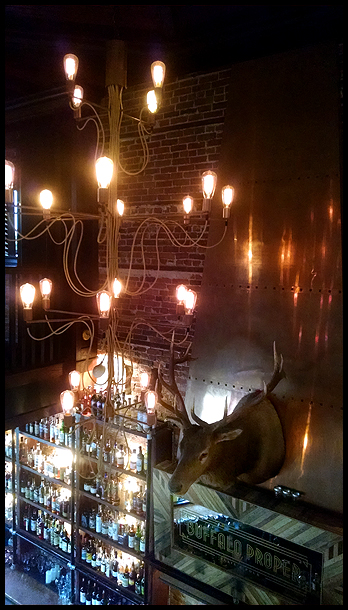 J and I ordered the k-uevos rancheros and churro french toast with a side of crispy potatoes, and it turns out they give you a number which you tell the hostess, and the hostess will then bring the order right to you in the restaurant! We didn’t even have to wait outside for the food! Hooray! 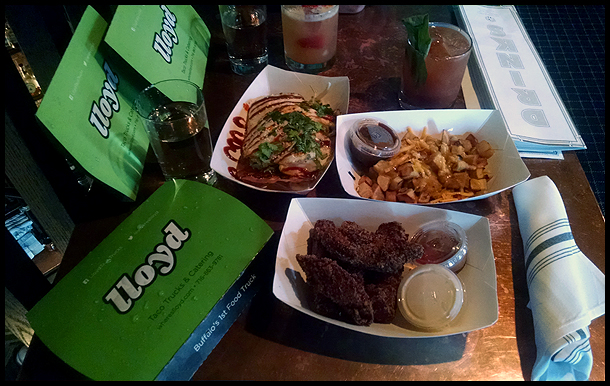 But what about the Bloody? This isn’t a brunch blog, after all. 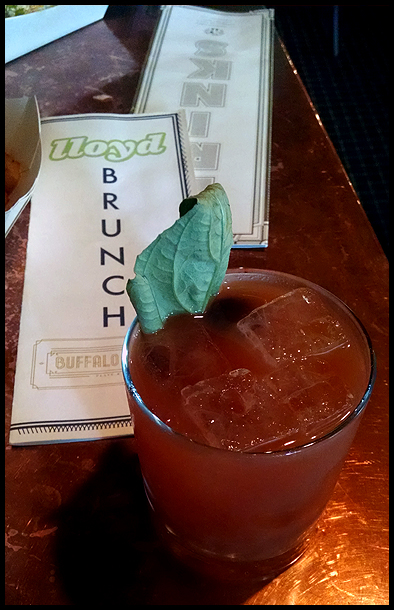 $10 and served in a rocks glass, their Bloody Mary is made with vodka, lemon and Employees Only mix, and garnished with an olive and big basil leaf. Another Buffalo brunch blog/instagram claims that Buffalo Proper squeezes their own tomatoes for the mix but…it says right on the menu that they use Employees Only mix. I’ve never had the mix before, but I’m thinking the taste of the drink is coming right from the mix with little to no additives. It was very spicy, but it was unclear from what, and you could see all sorts of “debris” in it – like little tomato seeds. The mix is supposed to have horseradish in it, but I couldn’t taste it at all. It had a decent fresh flavor, definitely drinkable, but not over the top. I’m not sure I’d go out of my way to buy the Employee Only mix, and thankfully now I know, since it’s a bit spendy.

So we’re off for our mini vacation, and I’m hoping to stop by Finger Lakes Distilling who supposedly make their own Bloody Mary mix!