The day finally came, the Buffalo Bloody Mary Fest! If you recall, I was bummed because the event sold out before Christmas and none of my friends bought tickets in time. In the weeks before I had friend after friend begging me to find them tickets, with no such luck. I did have one friend manage to buy one from someone through facebook, so J (our DD since he doesn’t like Bloodies), Jeff and I headed to Shea’s to enjoy a nice Buffalo Sunday. 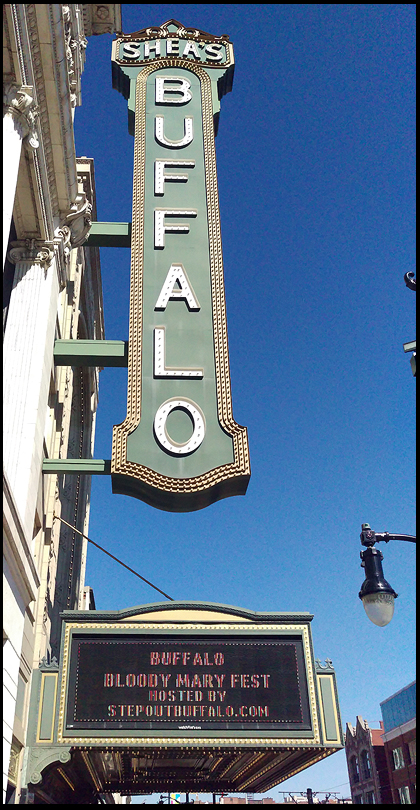 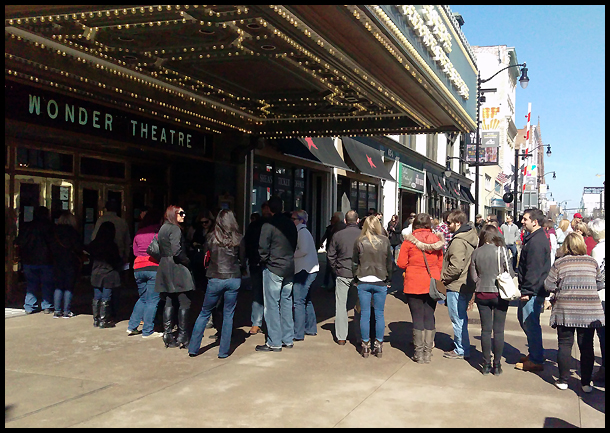 A gorgeous Buffalo winter day, good for standing in line.

10 bars/restaurants participated in the Fest, offering up their best take on the Bloody Mary and the most creative garnishes. I sampled them all, even the ones I’ve had before at the actual restaurants, but my reviews here are going to be pretty quick. All the drinks featured vodka from local distillery Tommyrotter.

1. CRaVing
Ingredients: Tomato, fennel, beets, horseradish, celery, sriracha, and house vegan worcestershire.
The drink was fairly watery, but was very peppery with a good spice level, though I didn’t detect any horseradish flavor at all. I thought it was pretty good, but unfortunately they lose points for not having any garnish whatsoever. 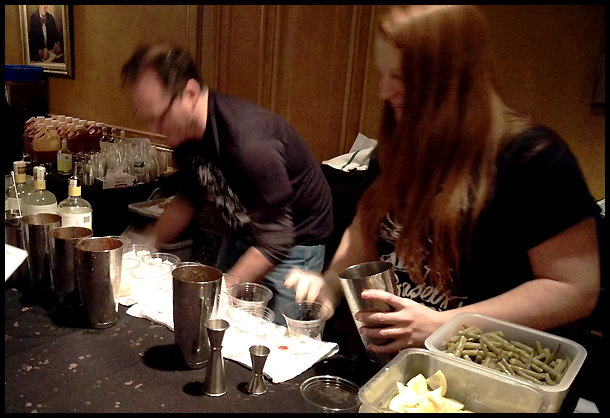 2. Hydraulic Hearth
Ingredients: Fresh made tomato juice, fresh squeezed lemon juice, Old Bay seasoning, smoked paprika, dijon mustard, Worcestershire sauce, bacon, basil, garlic, pepper, salt, celery seed, red and green tabasco.
A thick, sweet, lemony drink with a smoky almost chipotle taste. It had a very fresh tomato-y taste, and I’m impressed they found such good tomatoes to use in the winter. Garnished with lemon, pickled green bean and bacon, it wasn’t very spicy despite the tabascos listed on the ingredient sign. It was pretty good, if a tad different due to the sweetness level. 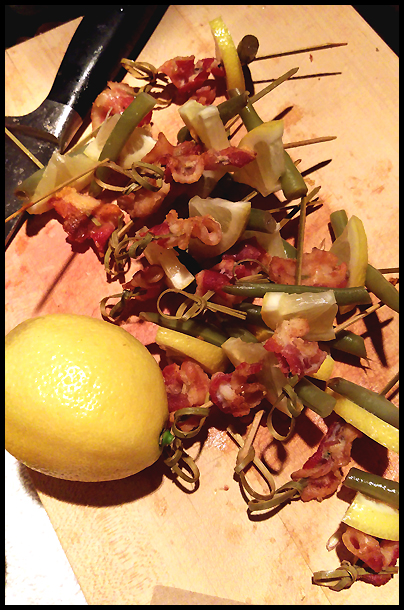 3. Bar Bill
Ingredients: Bar Bill Bloody mix, pepper, celery, salt, Worcestershire sauce, lemon, lime, horseradish, Bar Bill hot sauce.
This drink, potentially, had the best garnish – some kind of chicken wing dip fried wonton. I say “potentially” because had it been freshly fried, it would have been excellent. Given that they had to make hundreds of them for a festival, they weren’t as crispy as I imagine they normally would be. The drink itself was suuuuuper salty. I couldn’t drink mine, Jeff liked it though. 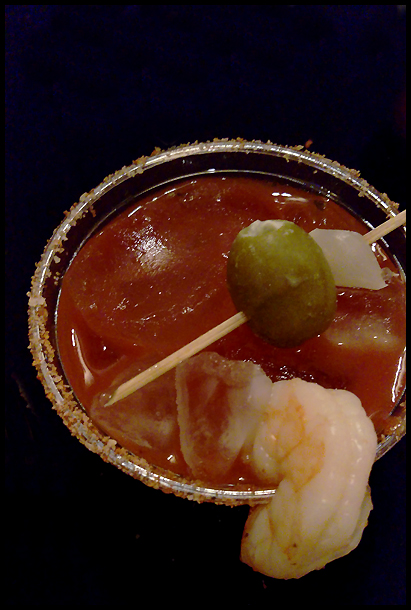 4. Oshun
Ingredients: Lemon and lime juice, fresh horseradish, tomato juice, Worcestershire sauce, salt, pepper, onion, olive brine, celery salt, fresh garlic and hotsauce.
If you remember from my previous review a few weeks ago, I had issues with the fact that they advertise a shrimp garnish on their Bloody, but did not deliver. Well this time, they did! The drink was still as tasty as it was at the restaurant.

5. Trattoria Aroma on Bryant
Ingredients: Tomato juice, lemon juice, orange juice, garlic, celery, salt, pepper, horseradish, onion, Worcestershire, beef reduction, hot sauce, barbecue sauce, jerky, ranch aioli, fried onions.
Another Bloody that I’ve had before, but unlike last time which was a midweek night, this seemed to be more like what I expected from them – a fresh made drink, not from a bottle. Garnished with fried onions, it had a very smoky taste, and the pickled jalapeno garnish, which I thought was just a regular pepper before I ate it, provided a giant hit of spice. J and I have been there a few times for dinner, but they are still on my brunch hit list. At this point I became a bit overwhelmed by drinks, as J was making the rounds and picking more and more up for me, so I didn’t end up finishing this one 🙁 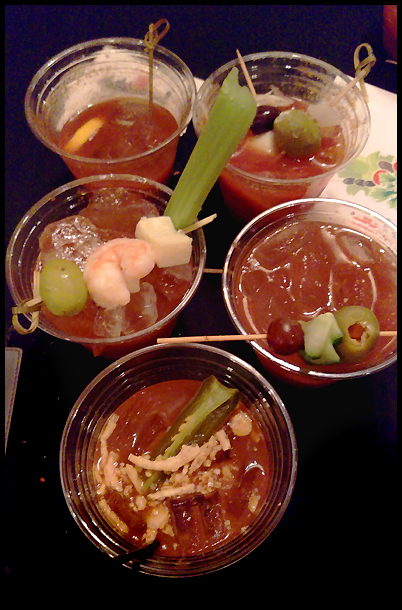 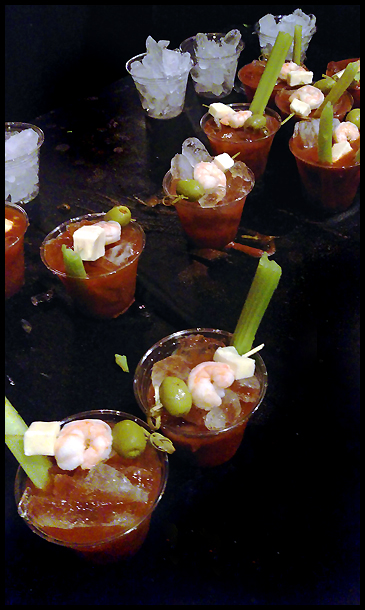 Cole’s line up of Bloodies

6. Cole’s
Ingredients: Fresh cucumber, kale, celery, tomatoes, Cole’s Bloody Mary spices, tabasco, Grey Poupon mustard, cilantro, pepper, celery salt, sour mix.
Each restaurant had a sign on their station with their ingredients list, and I must say I did NOT look at this sign before grabbing this bloody from Cole’s, or I would have passed. So many things about this drink that I hate. Cilantro tastes like shampoo to me, and cucumbers are the devil. Blleeeeecccch. Needless to say this one went into the garbage. It did have a nice garnish of celery, shrimp, olive and cheese (and they gave me a free garnish later on when I was walking around taking photos) I’ve had their Bloody late night when I used to get out of work in time on Tuesdays, which were just ok, but I hear good things about Cole’s Bloodies at brunch, so it’s still on my list to visit some weekend.

7. Buffalo Proper
Ingredients: Fresh pressed tomato juice, roasted tomato puree, charred jalapeno, caper berry, horseradish, Worcestershire, tabasco, lemon.
Another bloody I had before, when we went there last year for Lloyd’s brunch. I didn’t mind it, but I’m not sure this offering was the same. It was very different from the others on offer at the Fest. It was very tomato-y and clearly very fresh with lots of pulp. It wasn’t very spicy this time, but perhaps they were going mild for the crowd. Garnished with olive, cucumber (evil!) and a grape, now that they offer their own brunch, it may be time to go back. 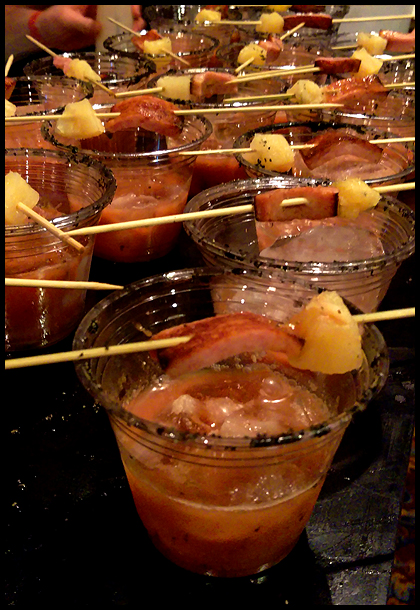 8. Ballyhoo
Ingredients: Ballyhoo Bloody mix, pineapple, horseradish, habenero, mango hot sauce, Korean BBQ, lime, coco lopez
Called the A’ole pilikia, this is Ballyhoo’s Hawaiian Bloody, and it was the most unusual one of the day. Garnished with pineapple and grilled spam with a spiced rim the drink was very very sweet and pineapple-y. There was a mild amount of spice, even though there was habenero in it. It wasn’t bad, but it was too sweet for me. The reason I started drinking Bloody Marys was because I was tired of having sweet drinks all the time.

9. The Lodge
Ingredients: Tomato juice, lemon and lime juice, olive juice, Tabasco, Worcestershire sauce, celery salt, pepper, horseradish.
Another restaurant we visited for brunch last year, I don’t feel like what they offered today was an accurate representation of the several Bloodies they offer on their menu. Jeff couldn’t stand this one at all, and I didn’t think it was bad, but it had an overwhelming pickle flavor despite pickle juice not being listed as an ingredient (perhaps it was too much olive juice?). It had a “breakfast salt” rim (whatever that is), and a LOT of it. It did, however, feature candied bacon and I took the drink with the largest piece of bacon in it 🙂 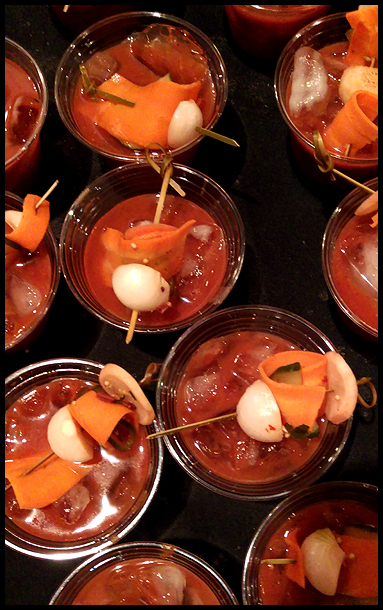 10. Providence Social
Ingredients: I don’t know because I must have been nudged when I took a photo of their sign because it is one giant unreadable blurred mess.
Last but not least, Providence Social, which we had visited before and quite liked. Garnished with pickled carrot, onion and cucumber (again!) it had a smoky yet pickle-y tasted to it and good spice level. 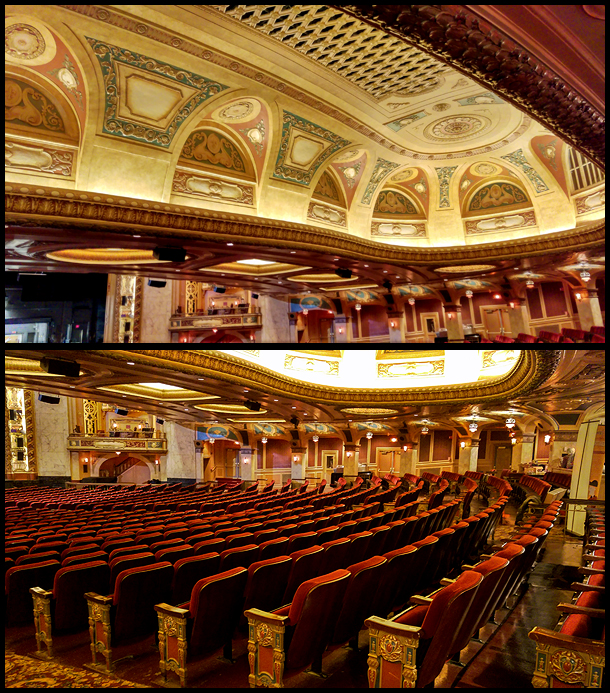 The first year for any festival is always kind of up in the air – it could be great, it could be a bit of a disaster, especially for an event that ended up more popular than anyone expected. Plus, food and drink events in Buffalo can get a bit overwhelming (see also: Buffalo Soup Fest, which I love, but is always too crowded.) I don’t know how many tickets they sold, or what the capacity of the Shea’s lobby area is, but I was impressed that for the most part, it wasn’t a giant crowded clusterf***. There was such an outpouring of disappointment over the event selling out, but I hope if they have it again next year they don’t go too big with it. It was a nice size, in a gorgeous location (as opposed to the hideous convention center), and it seemed to go off without a hitch. Step Out Buffalo did an excellent job, and we had a great time, although next year I should be a judge!!

(I’m not posting the terrible blurry “photo booth” picture of us haha. Maybe when they post the “official” photo.)