In case you missed it, or live under a rock, last week this little game based on a very obscure Japanese cartoon called Pokemon came out. And the internet exploded. LOL

I know nothing about Pokemon, as I was a bit older than the intended audience at the time it hit big in the United States. But I couldn’t help but get sucked into the game. It’s such a great concept!! You’re getting people out and about, including people that might not normally be super active. It’s active, it’s social, it leads you to discover things about your city that you’ve never noticed before. I love it. It’s made me get out of bed and walk 7 miles the last 3 days, where normally I sit on my phone in bed playing random games for hours, before moving the lazy party to the couch for the rest of the afternoon until I have to go to work. So kudos to Pokemon Go.

Unlike last time, it was actually brunch at Templeton Landing this time, and we were able to order breakfast foods, with the advertised bottomless mimosa and colossal bloody mary. 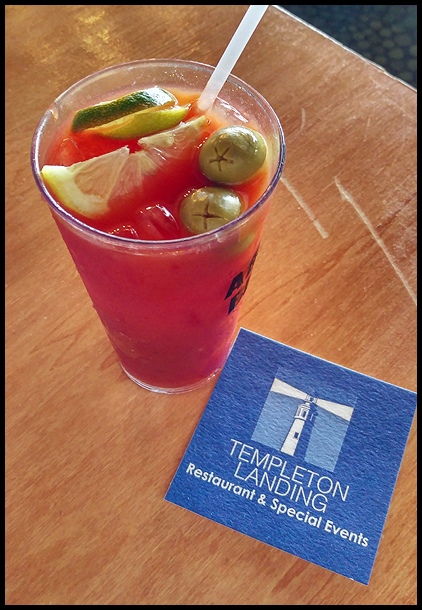 I don’t even care how terrible this photo is, I was just so mad this was all I got.

Someone please tell me what is colossal about that drink? What happened to the drinks full of fantastic fun garnishes from last year?? That is what I want! THAT is “colossal”! Instead I got a $10 bloody in a pint glass, with a few olives and citrus garnish. Ugh. Basically it was the same drink I got the first time we were there, full of thick tomato juice and Frank’s hot sauce. As soon as our waitress put the drink in front of me, I was epically let down. Ugh. It really ruined my time for a while. I definitely never need to go back.

At least the koi pond in front of Templeton was a Pokestop we could hit up every 5 minutes.