Sunday morning, we woke up fairly early (for night shift workers) after attending an Oktoberfest the afternoon before and going to bed early. Up early means brunch! It was a cool fall day, but nice enough to take a walk and get some food. I suggested we try Lloyd’s Taco Factory. We had their brunch before, when they were just serving out of their truck in partnership with Buffalo Proper, but now with a brick and mortar location they’ve started offering their own brunch. We made it to the restaurant only to find it closed! Now what? Time to cross the street and check out what CRāVing had to offer. 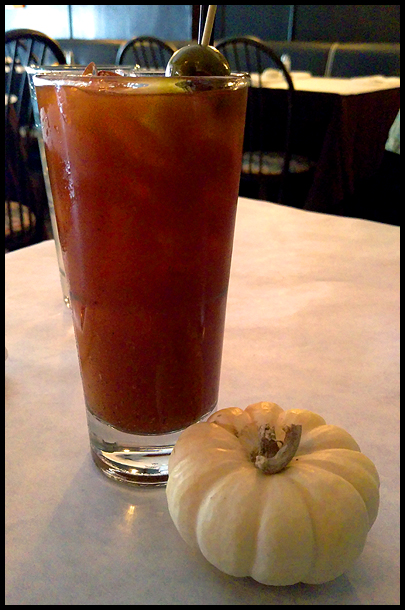 Garnished with an olive and lemon slice, it didn’t look particularly fancy (especially after last weekend‘s bloody!) It was very watery, with a touch of horseradish tang. It had a good spice level, but none of the flavors were particularly strong. It didn’t have a strong tomato taste, and I couldn’t detect any fennel or celery flavor. It wasn’t mind blowing, but it was drinkable, and for whatever reason, it felt healthy!

J commented that I’m supposed to be making him taste my drinks, to palate train him, so he finally had his first taste of a bloody mary…and his last. LOL