It seems like Buffalo is having another new restaurant open every week. We go out for dinner twice a week and we still can’t keep up. We have a list of places we have yet to visit, and new ones keep getting added! Burning Buffalo is a new restaurant and bar on Hertel Ave, and we tried to go a few weeks ago but they were closed. Turns out we tried to go the day before their official opening. Oops. But we made it there eventually.

I was starting to get a little sad, because honestly, I haven’t had a local bloody mary that blew me away in a while. They’ve been mostly alright, but nothing GREAT! When I saw it on the menu I was hesitant to order it, only because I wanted something yummy to drink, and I was scared of being disappointed again. But I gave them a chance anyway. 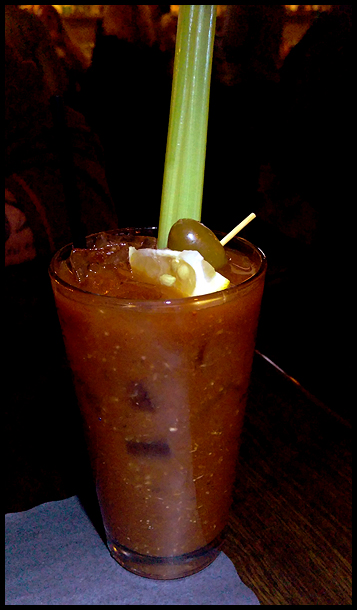 The Burning Buffalo Bloody Mary. Served in a pint glass for $8, and garnished with lemon, olive and a full celery stick, this cocktail is labeled “Local” for featuring Niagara Distilling’s 1812 Vodka and a house made mix. Advertised as smoky and spicy, I was a little nervous since the last bloody I had that was labeled “smoky”, in St Louis, was really too much. Fortunately, this bloody was a fantastic mix of smoke and spice. It didn’t taste like they stirred it with a lump of burned wood straight out of the campfire. The spice wasn’t overwhelming, but it was definitely present, as well as a lot of visible pepper. And if you needed more, there was definitely some pickle flavor as well.

I was impressed at first taste, and I had J take a sip as well. He is still scared of bloody marys, but even he said it was pretty good. I’ll learn him one day!

Burning Buffalo’s bloody is one of the best I’ve had locally in a while. Definitely try it. I also had their turkey club sandwich, which included a stuffed banana pepper, and it was fantastic.