The Superbowl has come (and gone) and being from Buffalo, by default I have to hate the Patriots. So booo on that admittedly incredible comeback. In reality, I am not a football fan (Go Sabres!), but I am a brunch and bloody mary fan, and Fat Bob’s Smokehouse was having a Super Sunday Brunch with a “build your own bloody” special. Sign me up!

I have had Fat Bob’s standard bloody before, and having re-read my review to refresh my memory, it wasn’t fantastic. It was a good start, with a tasty house made mix, but lacked anything to make it special. Enter their BYOB menu. 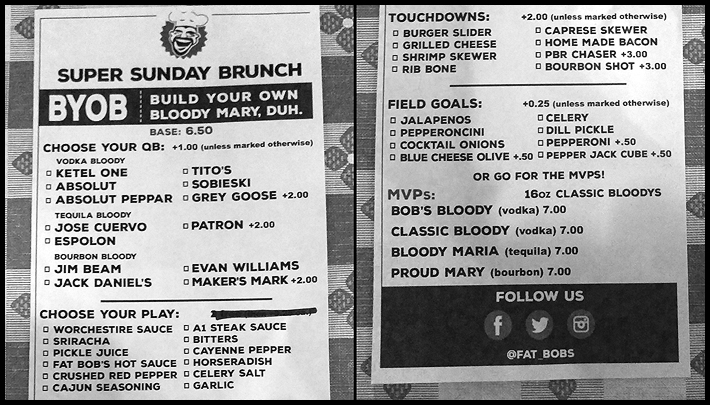 So many choices! Where does one even begin?

At the top I suppose. Priced at $6.50 to start, my assumption is that if you didn’t choose a vodka (or other liquor) for an additional dollar, you would get well vodka and not a Virgin Mary. I was overwhelmed with all the choices for additional flavors, and extras to add. With so many choices, J decided to create one for me as well. 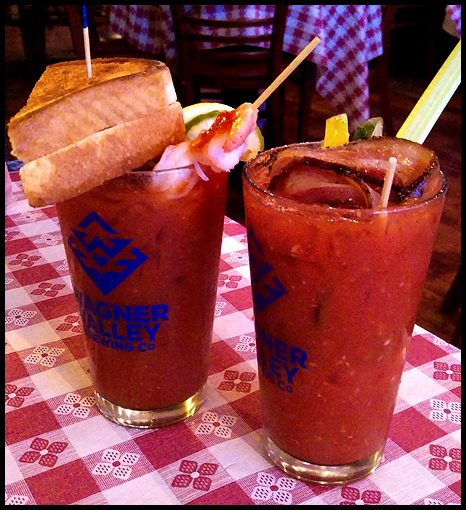 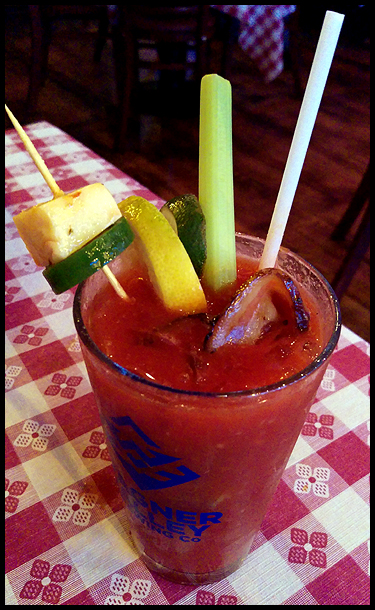 Once again, their mix had a good tomato flavor, and adding in their hot sauce and horseradish turned what was formerly a bit of a let down into a great, SPICY, tasty drink. Usually I’m a fan of my bacon being super crispy, nearly burned, but when it’s house made and thick, I’ll accept limp bacon. It was delicious (I had some more from the buffet too). Sadly, unless I somehow missed it at the bottom of the glass, my pickle and pepperoni were forgotten, but I got the standard celery (which was listed as an add-on) lemon, and lime garnishes. 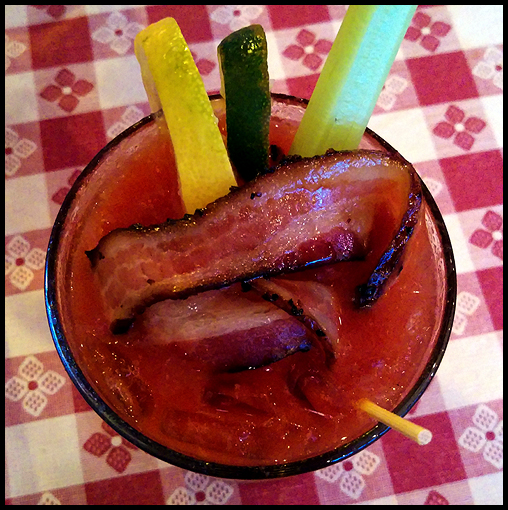 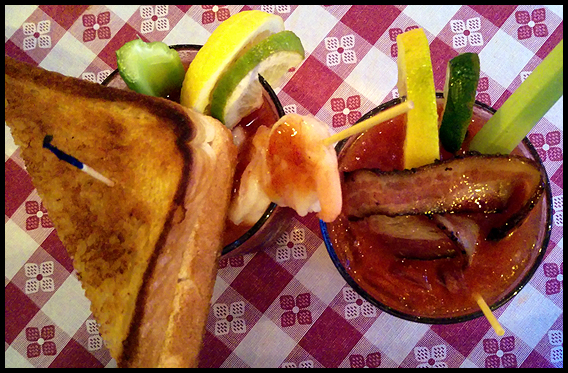 It’s really neat how the “same” drink can turn out so very different. This cocktail had a sweet taste to it, along with more citrus notes. It was spicy, but it was hard to tell if it was spicier than my creation, as my tongue was already burning. I didn’t feel like it was overwhelmingly Cajun, but perhaps the flavor got overpowered by the hot sauce and other additions. Topped with half a grilled cheese sandwich and 4 shrimp, it also had the standard lemon, lime and celery garnish. 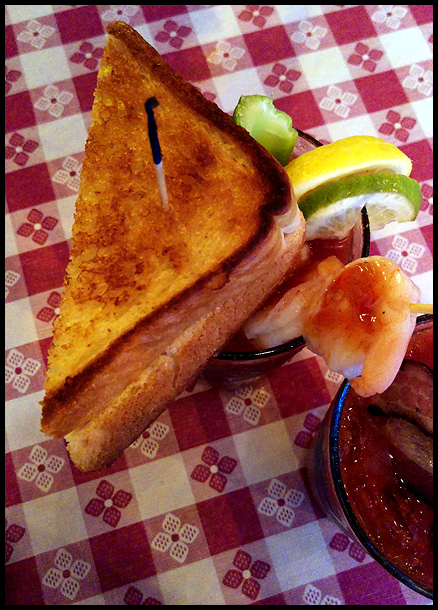 For anyone who was overwhelmed by the BYOB choices, they still offered “classic” bloody marys with a variety of liquors to choose from.

I forced J to try both, as I continue to palate train him, and he didn’t hate them! Our waitress came by and saw me with both drinks though, and she was concerned that he didn’t like his. J told her I had a blog, and they were both for me, and then the catering manager came to talk to us, and they’re going to read this post, and man, that puts the pressure on to 1. write a post worth reading and 2. not be mean. Luckily, both drinks were tasty, and other than a few missing garnish choices, I have nothing bad to say 🙂

I honestly don’t know if Fat Bob’s offers brunch normally, but if they don’t, they should keep this BYOB menu available. I imagine it can get annoying for the bar tenders, but they have a good base mix to start from, and with all the choices on the list, a guest can create the perfect drink for them.

2 shots of my drinks from the Fat Bob’s Instagram, taken by Cory Watson. I was the first to get a grilled cheese.