I’ve been living in my house for 9 years next week, and one of the best things about owning a house with a nice yard is the ability to have a garden. Besides the “regular” veggies like tomatoes and peppers, I usually plant broccoli, green beans, onions, and cucumbers – even though they are evil and I hate them. Once in a while I plant tomatillos, the main ingredient in salsa verde and other Mexican cuisines. My first foray into tomatillos was an heirloom purple variety I had picked up while visiting friends in Toronto. At the time, no one local was selling started tomatillo plants, and I don’t have good luck with starting seeds on my own, so they were my only choice. They did well, but the fruits tended to fall off before completely ripening into purple, so anything made with them turned into a kind of yucky brown. But they tasted good! They reseeded on their own the following year, but after having so many, and little to do with them, I took a few years off from growing any. This year a local nursery was selling seedlings of the more common green variety so I picked a few up. 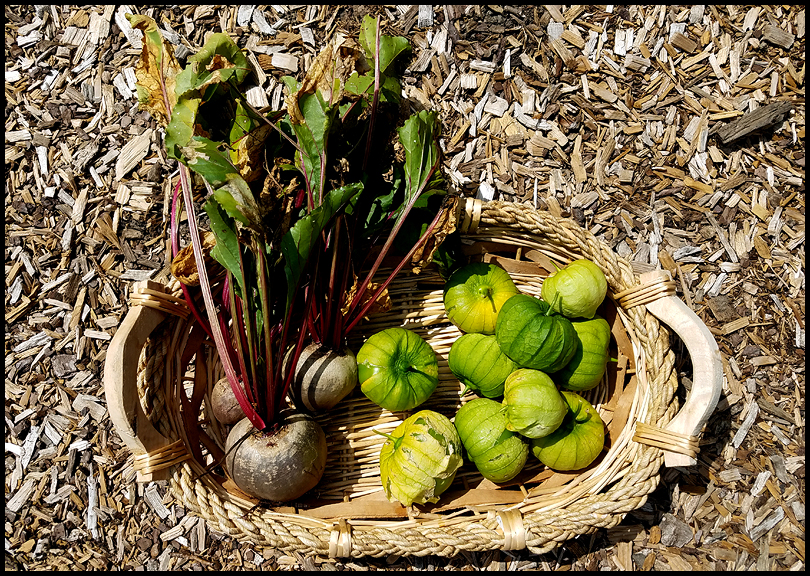 Tomatillos (and the last of the beets)

I still don’t know of many things to do with them aside from salsa verde, and a few recipes for soups and stews from Pinterest, but I’ve heard of people using them for Bloody Mary mixes, so I thought I might as well give it a shot. If you haven’t had tomatillos before, they have a bit of a tart taste, which should make for a delightful mix.

The internet provided me with some guidance, and I built my own recipe combining 3 (here, here and here). Some had cucumber (again, evil!), some had cilantro (also evil!), but the basic ideas were the same, and I decided to take 2 approaches – one roasted, and one “plain”. 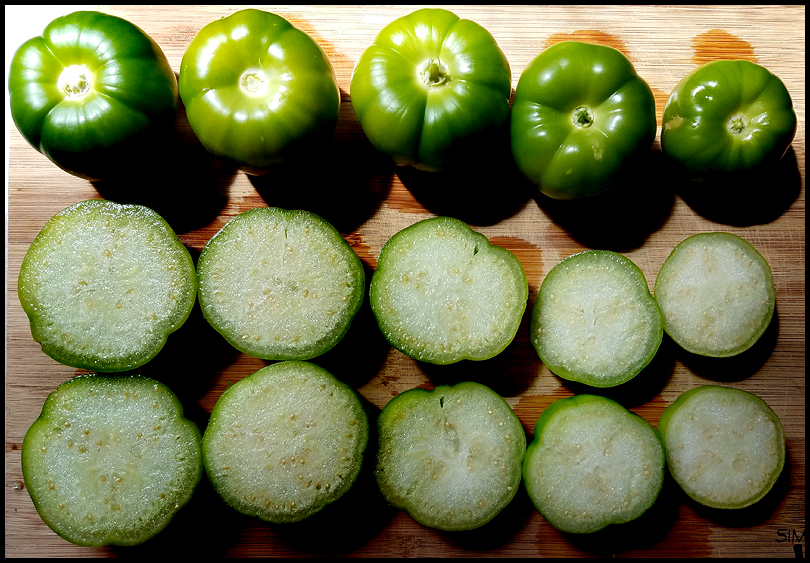 Tomatillos have husks that begin to peel back when the fruit is ripe. Under the husks, the fruit has a stickiness to it, which you probably want to wash off (I did). I cut 5 tomatillos in half horizontally and combined them with olive oil, salt and pepper in a bowl to prepare them to grill. Then came the hard part – starting the charcoal. I don’t think I’ve used my grill since the last grilled bloody mary I made, and I always have trouble. I used the charcoal chimney and got it going pretty quickly. While the chimney did it’s thing, I focused on the non-grilled mix. 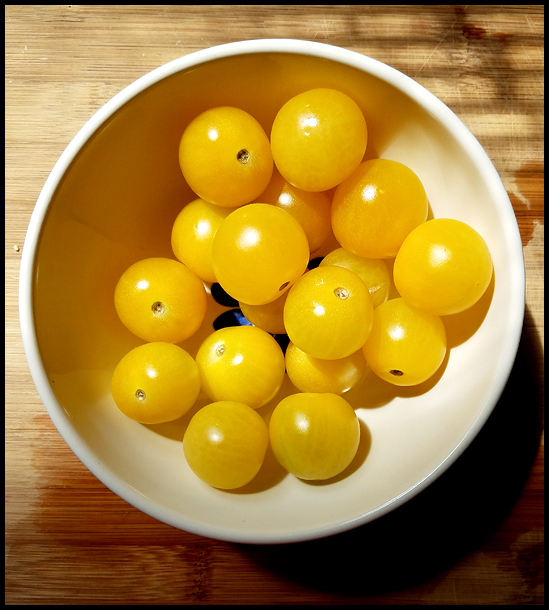 I prepped the rest of my ingredients, including lemon drop cherry tomatoes from the garden. It’s best to use yellow or green tomatoes in the mix, so your coloring doesn’t turn into that blah brown I spoke of before. When adding all my ingredients into the blender, I couldn’t find my horseradish. I know I had some, I’m POSITIVE I bought a jar for the last recipe, but it seems to have disappeared. D’oh! So off to the store I went, while the charcoal chimney did it’s work. Once I got my last ingredient, the mixing is easy, and it was time for some grilling. 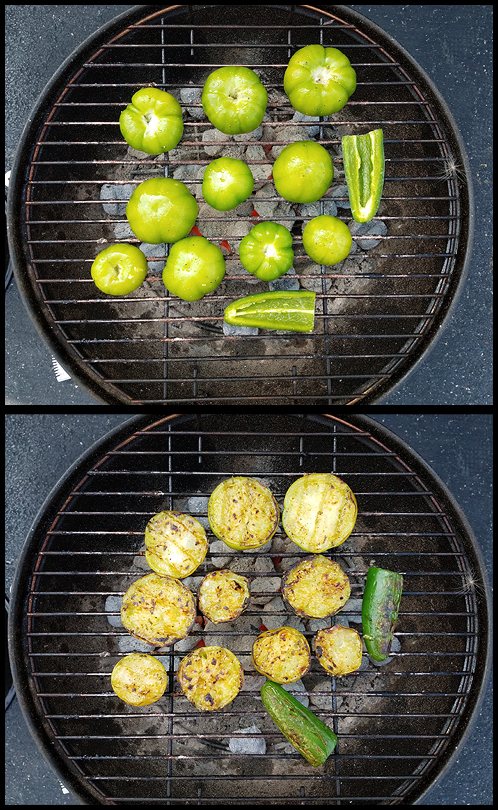 Starting with the cut sides down, I roasted the tomatillos and jalapeno 5 minutes on each side. The tomatillos got pretty soft, so in the end I lost some of the “guts” of the smaller ones. Once time was up, I just threw them all straight from the grill into the blender with the rest of the ingredients and mixed them up. 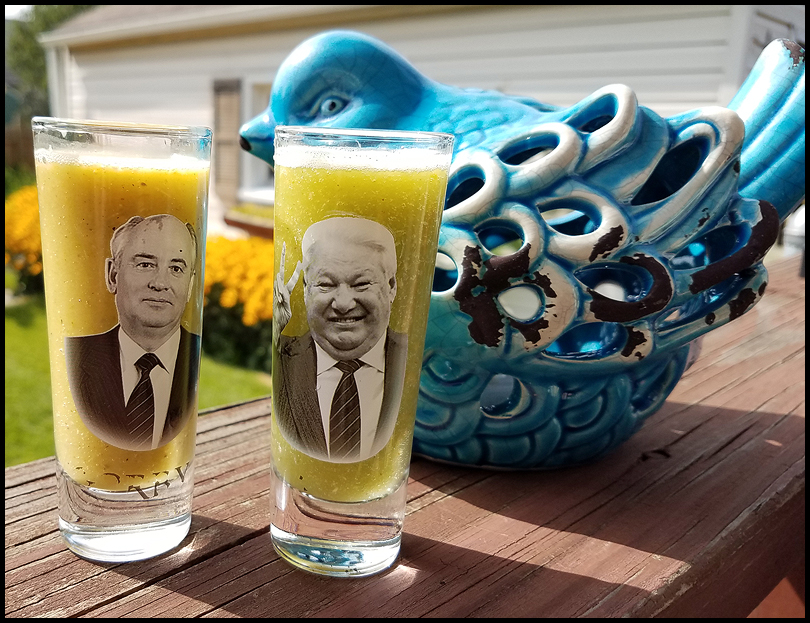 As you can see, the coloring between the roasted mix (in the Gorbachev shot glass) and the non-roasted mix (in the Boris Yeltsin glass) is a bit different, with Boris being more green. I taste tested them without any alcohol, since I had to go to work.

Non-roasted: Very tart with a good hit of horseradish, and nice tongue tingle from spice.
Roasted: Still tart, but with a sweetness to it brought out from the grilling. Given the rest of the recipe is the same, the spice level is comparable.

The non-roasted mix produced more, filling 2 medium size mason jars, while the roasted mix only produced slightly more than one jar, and it was less thick. I didn’t lose that much tomatillo to the grill, so I’m not totally sure why they were so different. Both mixes are fairly thick, and there are a lot of little seeds in tomatillos (and tomatoes of course), so they could stand to be strained, but that’s up to you (I will be straining it eventually). 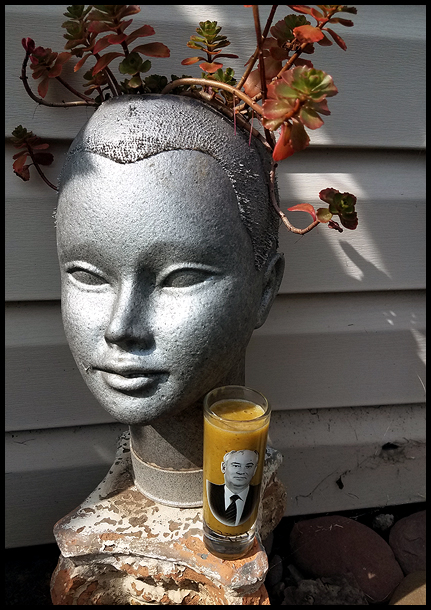 Either way, it’s nice and refreshing and you can alter it however you like. If you like cucumbers or cilantro, go for it, but remember it’ll taste quite a bit different. Add more peppers or hot sauce if you love the heat, or leave them out completely. When you make your own mix, you can do whatever you want! Enjoy!

For the roasted mix: Halve the tomatillos and drizzle with olive oil, salt and pepper, then roast with the halved jalapeno for 5 minutes per side.

For the roasted and regular mix: Combine all ingredients in a blender, and puree. Taste and adjust seasoning as desired. If the mix is too thick, add more water, and/or strain through a fine mesh strainer. Chill mix before serving. *Remember* grilled items WILL BE HOT, so BE CAREFUL and let cool before blending.

Garnish as desired, and enjoy! 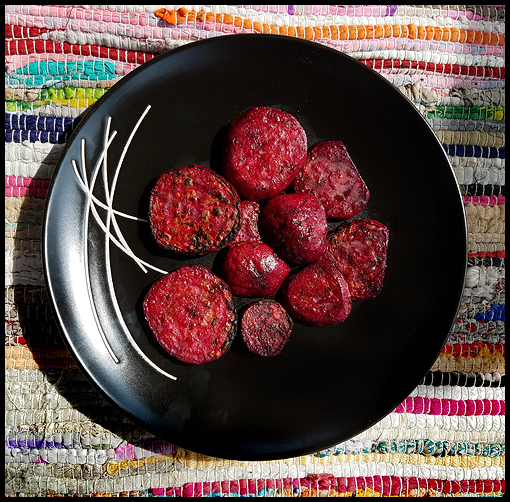 Since the grill was going, I grilled the beets as well. Why not?