And this brings us to New York City. We took an overnight trip to NYC to see Hedwig and the Angry Inch, the greatest rock opera ever made, on Broadway with Neil Patrick Harris, and I wasn’t going to miss the chance to have a few good Bloody Marys. So I hit the internet to find a “best of” list for the Big Apple. Unbeknownst to me, there is a bar in Manhattan that claims to have invented the Bloody Mary – King Cole Bar.

From their website – “In 1934 St Regis bartender Fernand Petiot introduced the “Red Snapper”, which was soon to be known as the Bloody Mary. Petiot began working on the vodka and tomato juice cocktail in Paris in the late 1920s before coming to the St Regis New York. The famed cocktail as we know it was created when Serge Obolensky, a well known man about town, asked Petiot to make the vodka cocktail he had in Paris. The formula was spiced up with salt, pepper, lemon and Worcestershire sauce, but since “Bloody Mary” was deemed too vulgar for the hotel’s elegant King Cole Bar, it was rechristened the “Red Snapper”. While the name might not have caught on, the spicy drink most certainly did and over the years it has become the signature cocktail of the King Cole Bar. We are pleased to present our World Collection of St Regis Signature Bloody Mary Blends celebrating the regional influences of the original recipe created by Fernand Petiot. All are prepared with the freshest homemade mixes, and each salutes tradition with its own unique twist.”

With limited time in the city, we couldn’t hit up the vast number of places offering delicious Bloodys, but it turns out the King Cole Bar was on our walk from the apartment we rented to the theatre, so we had to stop in. Even though the reviews warned that you were going to pay for the history behind the drink, and I was aware that this *is* Manhattan after all, I felt like I couldn’t miss out on the opportunity to have a Bloody Mary where it all began.

The bar was very busy and we almost walked out since there was no place to sit, or even stand, but somehow the waiters found us a tiny table and 6 chairs to jam us into a corner, despite us looking like glam rock freaks among all the suits having cocktails on the way home from work. (Hedwig *is* a rock opera if you didn’t catch that part.) 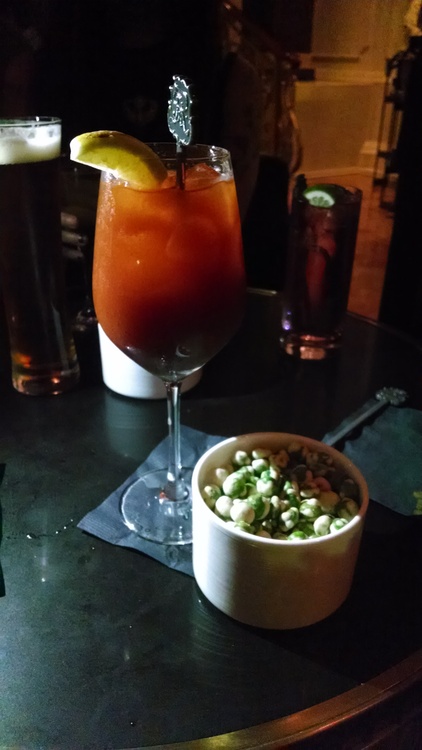 There it is in all it’s glory…A Bloody Mary…in a wine glass…with only a lemon for garnish…for $25. Twenty Five Dollars. In a wine glass. Did you miss the price. $25.

Ok fine. Like I said, it’s Manhattan, there is a history behind it, though it was far too busy to get the history, I understand you pay a premium. But for 25 damn dollars I want a Bloody Mary that is a bit bigger than freaking wine glass. The only saving grace is that it came with a bowl of wasabi peas (and almonds, not pictured). For $25 I was eating all the wasabi peas, which we did, and they brought a 2nd bowl, which came home with us in my purse.

The taste you ask! Was it the most mind blowing amazing Bloody Mary I’ve ever had? Did the taste wipe away the bad taste that came with the price? Was the first the best? No. At best it was average. I asked for it spicy, and my notes say it was, but it came with an overwhelming taste of celery which I’m not fond of.

If I was going to make a list of the most overrated Bloody Marys I’ve ever had this would surely be at the top. If you are a sucker for history, sure, take a trip to King Cole Bar and order the Red Snapper, but if you are truly looking for only the best tasting, or most creative garnishes, give this one a big old pass.

For fun, here’s the rest of our bill 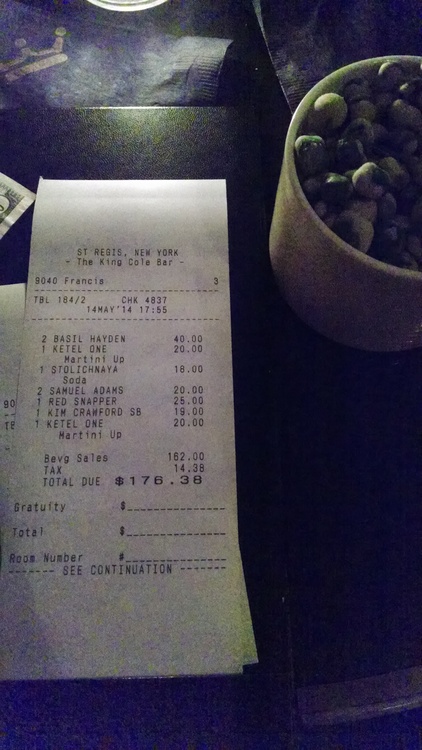