2 years ago one of my friends and co-workers invited me to be a part of our company’s trivia team for Cradle Beach’s “Buffalo’s Smartest Company” fundraiser each spring. Our company won a few years ago, but as they like to pick on me, we haven’t won since I joined the team. 🙁 I like trivia, and showing off weird knowledge, even if I do feel pretty stupid now that I’ve finished my first season playing Learned League (I came in 18th of 24, and had several competition days where I scored zero, boo!) So of course, bar trivia is a good mix of smarts and spirits, and we will attend different styles at different places around Buffalo, the most recent one occurring at the New York Beer Project in Lockport, NY.

J and I headed over there a bit early, as we had nothing else to do, and good thing we did! We were told it started at 9 but when we got there at 8:30, it had already started. We joined in late as The Dirigible Plums, as we waited for our other friends to show up, and the quiz master gave us a free 10 points to make up for missing most of the first round.

We’ve visited NYBP before and tried all their beers, but J got a flight again, and I decided on trying their Bloody Mary. 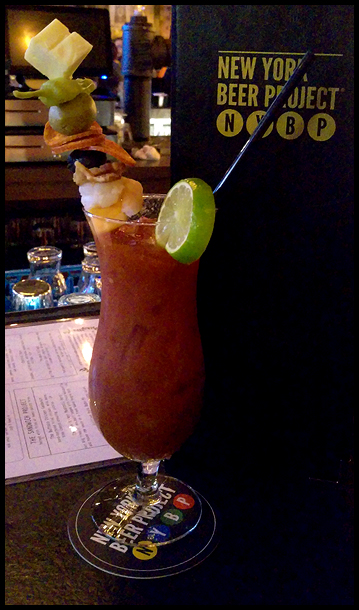 Served in a hurricane glass for $10, the NYBP had some garnish game going on – cheese cubes, pepperoni, pepper, bacon, shrimp, and olives on a skewer. The drink had a good amount of spice, good tomato flavor, with a hint of pickle. It was a decent offering from a brewery, and I’d have one again if I wasn’t in the mood for beer.

We ended up winning trivia night, by a lot. Guess we didn’t need those free 10 points!