I’ve been slacking. While we were at dinner a few weeks ago, J pointed out that I hadn’t blogged any drinks in a while. So that night I had a bloody mary but I got lazy posting about it. Now I’m 3 drinks behind, but that ends today! I’m going to start with the most recent one though, 810 Meadworks, and work backwards.

J had found a blog entry about local cocktails, and it featured 810 Meadworks as having WNY’s best bloody mary, which meant I had to try it. Somewhat unfortunately, we live about an hour away from 810, which is located in Medina, NY so it was a bit of a drive, but there is also a fantastic Mexican restaurant in Medina, so we made a night of it.

If you are not familiar with mead, it is an alcohol made from fermented honey, and it may have been history’s first fermented liquid! Since it’s made with honey, mead typically tends to be sweet, with even “dry” meads being sweeter than what you’d expect if you are used to dry wines.

My first, and previously only, mead experience was from a meadery on the west side of Seneca Lake, Earle Estates Meadery. While in the area with my parents, and aunt and uncle, we stopped in and did a tasting. I don’t remember my other family members being a fan, since they typically go for very dry wines, but I thought it was different and some were very tasty (in particular, their Cruisin’ Cranberry.)

810 Meadworks opened in 2014, with 8 different meads on tap. That number has grown to over 20, and we tried them all! Flights cost $5, for 3 – 2oz mead samples, which you can pair with some very creative handcrafted chocolates, or other small plates (there is no kitchen in the tasting bar so you’re looking at cheese and crackers, breads and spreads, to go along with your mead.) After your flight(s), if you’re still looking for more, they sell mead by the glass, and mead cocktails – which is where the bloody mary comes into play. 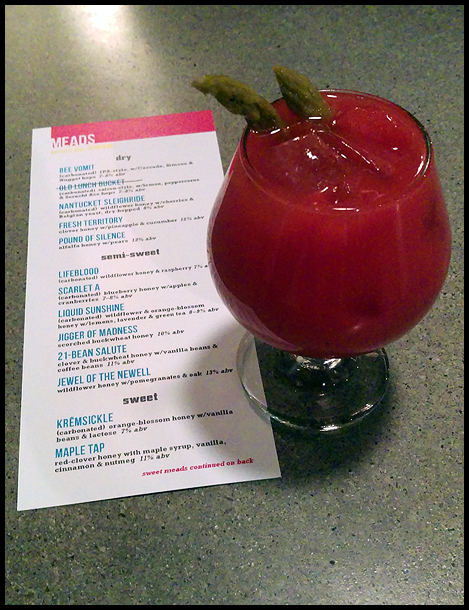 The Ghost of Mary

Presenting The Ghost of Mary! For $4, owner and brewmaster Bryan DeGraw, put together this little drink with his Royal Squeeze mead infused with ghost peppers, V8 bloody mary mix, and 2 spears of pickled asparagus for garnish. He asked if I wanted it very spicy, or just regular spicy, so of course I said “Very!”, which meant 2 oz of the ghost pepper mead. (Regular spicy would be made with just 1 oz, and mild would be made with a serrano and thai pepper infused mead instead.) The drink was different than your usual bloody mary, as the mead gives it a sweetness that vodka or other liquors do not. And the ghost peppers definitely made it spicy, probably too spicy for some people, but not for me! It was a simple drink, with a big taste, and I definitely recommend giving it a try if you are in the area.

As I said earlier, we tried all the meads currently on offer and I would say I enjoyed almost all of them. I didn’t try Fresh Territory, a pineapple cucumber mix, because cucumbers = evil, and strangely neither of us cared for their most popular mead – Sweet Devotion. But they had a special release Maple Tap, aged in a bourbon barrel, that was right up J’s alley and came home with us, along with a ghost pepper Royal Squeeze for me, and a bottle of Cheeky Keen for a gift. Check them out if you’re in the area, or as we did, make a special trip. (And if you want some great Mexican, give Mariacha De Oro a try!)

***
In related news, The Buffalo Bloody Mary Fest is returning in 2017, this time being held at Riverworks, which allows for a larger crowd. Tickets for the fest sold out in less than 4 days, again! Glad I got mine on the first day. Can’t wait!