Like I mentioned last post, J and I were on vacation, and decided to head down to the Finger Lakes to get away for a few days, try some wine, and do a bit of hiking in Watkins Glen. And like I mentioned, the weather was a bit crap, but we made the most of it and it ended up clearing up about mid way through day 2, and we had a great time. 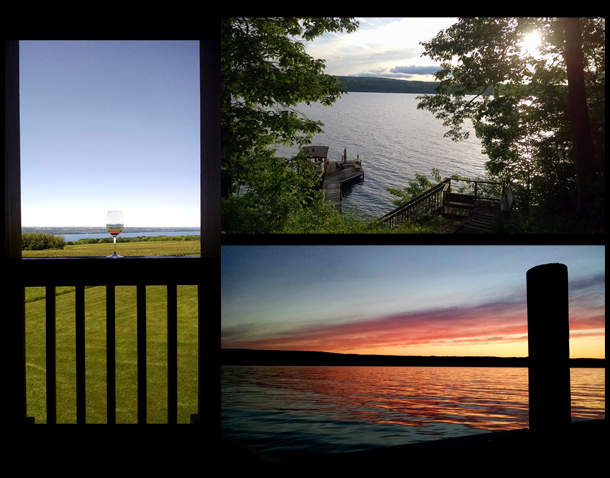 I lost track of the number of different wineries along Seneca and Cayuga lakes that we stopped at but we also stopped at 2 distilleries – Finger Lakes Distilling and Myer Farm Distillers. NY state law only allows 3 samples of spirits per day, so while they both had a big selection of spirits to try, we had to choose what we wanted carefully. J stuck mostly with whiskeys and bourbons, and I stayed with vodka and gin, even though I don’t drink gin.

Finger Lakes Distilling would ask how you usually drank each spirit and would make you a mini cocktail in a shot glass to get a feel for what it would taste like in a non-sampling situation. So when I said I drink my vodka in a Bloody Mary our sampler guy explained that their Vintner vodka was made with grapes, and this gave it a taste that wasn’t very suitable for a Bloody Mary, but that they made one with their whiskey if I wanted to try that. Sure thing! He made my little Bloody, complete with a bacon salt rim, and it was pretty decent but strange. I’m not a whiskey fan, so I can’t say I’d order it that way, but he was right about their vodka not being right for a Bloody either.

Which leads me to the only full size Bloody Mary I had during the trip. On our last day we stopped in Watkins Glen to go to Wildflower Cafe/Rooster Fish Pub/Rooster Fish Brewing. Rooster Fish is a craft brewery (of which we went to a few) with a flight on offer inside Wildflower which J wanted to try. He got a flight, and I got their Mary Mary Mary. 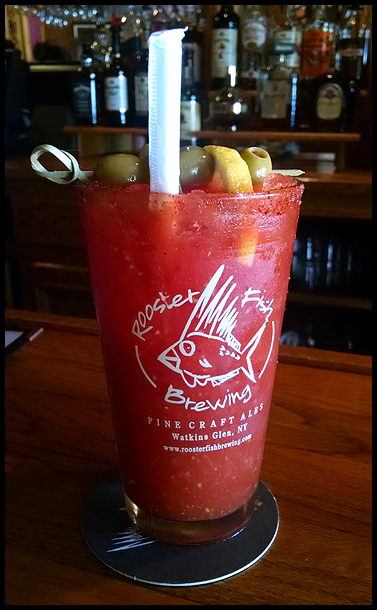 $10 and served in a pint glass with a lemon, lime and olive garnish and bacon salt rim, they usually made the cocktail using a spicy mix, their Tripel Witch Belgian beer and Vintner Vodka, however they were out of the beer, so they used their Summer Sky hefeweizen instead. The mix had visible horseradish for spice and flavor which was not overwhelming. As the sample guy at Finger Lakes Distilling said, the vodka has a strong grape taste which along with the beer made for a very sweet flavor, with a smoky hint from the bacon salt rim. It wasn’t bad, but it was different. I definitely would follow his lead and avoid using Vintner vodka for a Bloody, though it was quite good in the mini cocktail he made for me in our tasting – cranberry bitters with cranberry juice and vodka.

And now for something completely different. The best $7 I’ve ever spent. 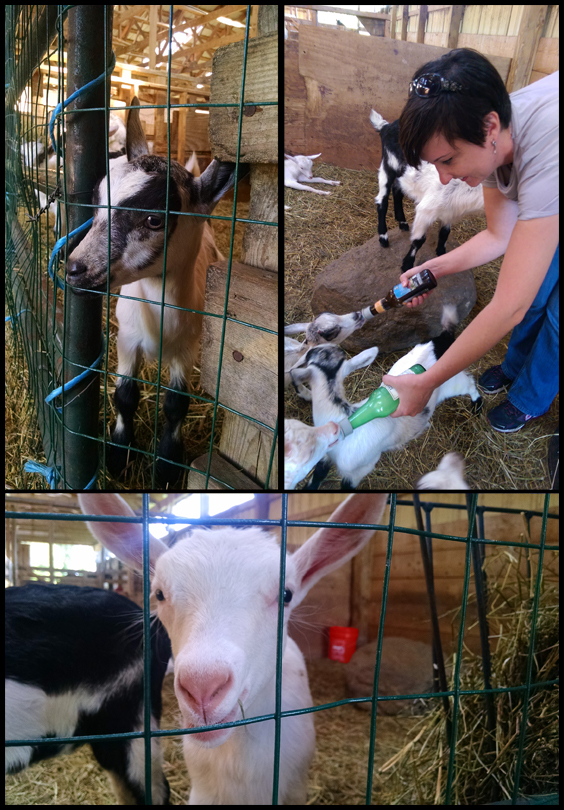 GOATS! I love goats! We found a brochure for Lively Run Dairy and just had to go. Lively Run is a goat farm, dairy and cheesery with tours and tastings every day. The tour runs at 2pm for $7 and includes a cheese tasting, but we were late. We were also the only people there, so even though it was 2:15, J asked if we could do the tour and they let us. Oh. My. God. They show you a video about the cheese making process, and then you get to go meet the goats, and depending on the time of year that could include bottle feeding baby goats. Seriously, it was the greatest. There were 5 babies still taking a bottle, and a whole group more who swarmed us anyway, it was awesome. If you are in the Seneca/Cayuga lake area, you have to go. The cheese was good too!