I am so bad at updating in a timely manner. My deepest apologies for all of you many readers who have been waiting for more bloodies.

For all those who have been waiting with baited breath, here you go. Chill 443 is a new restaurant that opened inside the Wyndham Garden hotel in Niagara Falls, NY. The building recently went through a renovation to turn the icky Days Inn with a Denny’s downstairs into the fancy Wyndham with Chill 443 for your drinking and dining pleasure. We started going late in the summer as they started hosting Trivia With A Twist pub trivia nights. They are a new company out of Ohio who just expanded their trivia services into WNY. I must toot my/our own horn here and admit that we take first place quite often. Often, as in, every time we’ve gone. So we keep winning gift certificates, and keep going back. Plus the food is decent, the beer selection is good, and they give a discount to locals.

Our last visit I noticed they had a fully stocked selection of Bloody Mary garnishes, so I asked our friendly bartender Phil (he looks like a Richard!) to make me up a drink. 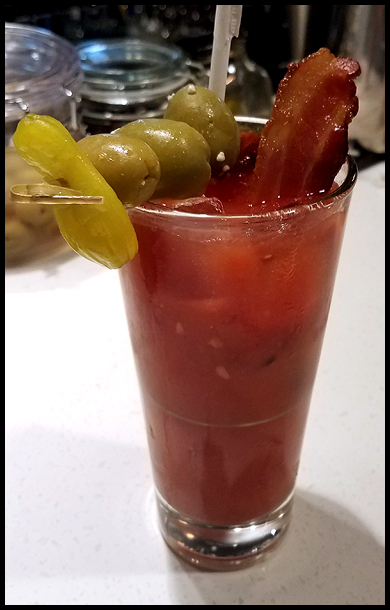 Chill features a house made mix that they spike with vodka to preserve. It was garlicky and spicy with a secret ingredient: pineapple. I’ve had a few others with pineapple before, and if done right, it does provide an interesting addition to the overall taste. Too much makes it too sweet for me, but this one had the right balance. Garnished with 2 strips of crispy bacon, 3 olives (one stuffed with blue cheese), and pepperoncini this cocktail was much better than I was expecting from a hotel bar on a Wednesday. Bravo to Phil (who also made me a great bourbon cocktail because I wanted to try walnut bitters, and I don’t even like bourbon.)

Stop in and check them out if you’re near by. And if it’s a Wednesday, prepare to get your butt kicked 🙂 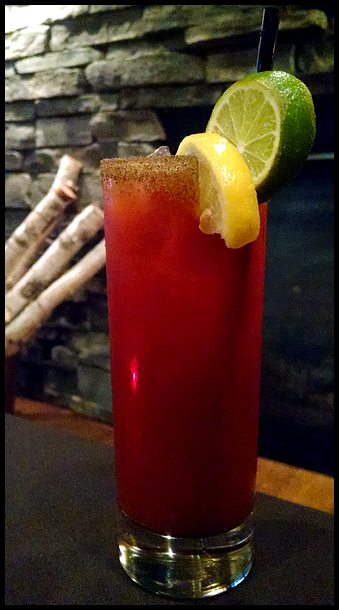 Jason and I have been taking Craps at work – learning how to deal Craps – so we went across the river to Fallsview Casino to play, because what’s the best way to learn? By losing your money! Or in our case, breaking even! Hooray! A few years ago I learned that there was this secret bar at Fallsview, down the hallway past the stores, up an unmarked elevator, down a hall…and voila, a bar with a fantastic view (during the day) of Niagara Falls. Jason didn’t know it was there either, so after we were finished playing we went up there and had a drink before heading back home. I think it’s called O3, but I’m not sure. It’s called R5. (Hey, I knew it was a letter and a number!) 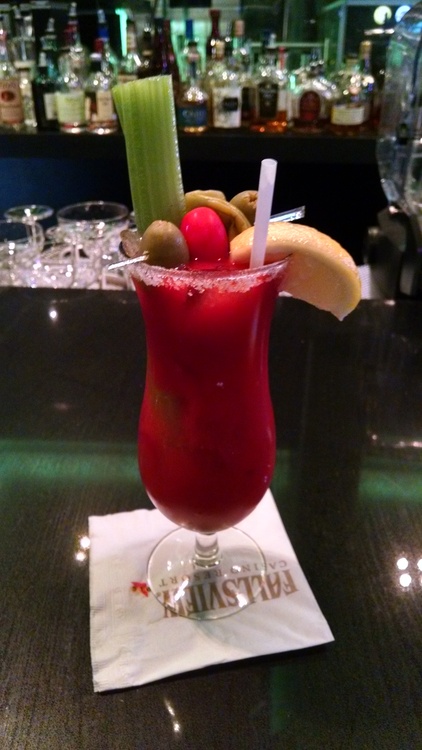 This is my first Bloody Mary served in a Hurricane Glass! For $6.50 (Canadian) I was surprised at how cheap it was. Drinks on the casino floor (not free in Canada, and also crappy) push $10, so I figured it would be the same at the fancy secret bar, but nope! Garnished with celery, lemon, 2 olives, a cherry tomato and peperoncini, I was impressed. Add the salted rim for a nice touch. Nice spice level, but it was probably straight tomato juice with added Worcestershire and Tabasco. Their menu did offer options on flavors, with different kinds of Tabasco, like Chipotle but the bartender didn’t ask my preference (perhaps because I just asked for super spicy). It was good, just fairly standard. They get points for the garnish though.

The bar has a giant cocktail menu, which is unfortunately not online, and they serve a small selection of appetizers. They have some extremely expensive cocktails that include precious stones for that special occasion, in case you’re looking 🙂

I am currently on my way to St Louis to visit my aunt, to watch the Sabres lose some more and to taste some Bloodys! I googled some “best Bloodys” for St Louis and found a few potential locations. We’ll see!

Niagara Falls, NY is a bit of a tragic city. We have this amazing natural wonder of the world, but the area immediately around it is lacking in attractions other than the casino. Go a few miles away and we have an outlet mall and shopping district that finally, FINALLY, after years has more than just Applebees, to eat at. We now have The Griffon Pub. The building used to be this fairly crummy diner that I would eat at from time to time with LeighAnne when we lived near by, and The Griffon totally remodeled it into a comfy gastropub. Since they are more of a pub than a cocktail bar, they have an extensive beer list, they do have a full bar, so I asked for a Bloody Mary to see how they’d do. 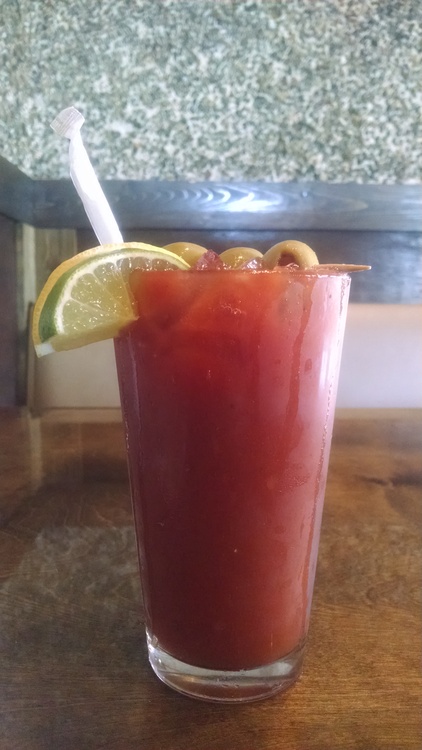 Served in a pint glass for $6, this Bloody was garnished with 3 olives, a lemon and a lime. It was very spicy despite no visible pepper or horseradish, and no Frank’s Hot Sauce flavor either. It was more citrus-y than you normally get, and pretty decent. Given that The Griffon isn’t a cocktail bar, maybe they just have a really good pre-mix.

The Griffon’s menu is fantastic. We went back to back days because we were in the area, and have gone back at least one other time since. There are just so many things we want to order. This time I had the Chicken and Waffle sandwich – holy crap, it was delicious. I had another one at a different gastropub a week later, and it didn’t hold a candle to the one from The Griffon. The staff has been super friendly each visit, and they have always been busy (last visit we had to eat at the bar). Finally something good in the Falls!