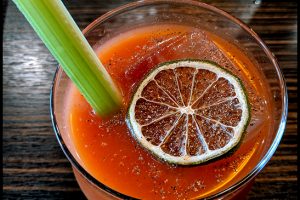 I know it, you don’t need to point it out.

I have a motivation problem. In that, I have none. On top of that, I haven’t had that many cocktails to post about. It’s not that I’ve run out of places with Bloody Marys to try, it’s that 1. we haven’t gone to any of these new places and 2. I haven’t been in the mood. And then I have to review it, like it was my (unpaid) job, and I just don’t want to.

So I’m going to clean up my back catalog of drinks, and hopefully, get back into the mood.

First up. Sun Burmese restaurant in Williamsville, NY (I do not know if they offer this at their other locations, though I would imagine they do). They make the drink with a house made mix spiced with wasabi, topped with pepper and a dried lime. There was other “heat” adding ingredients besides the wasabi, and while it was a small drink, it was tasty and worth a try.

Next, Mesque on Hertel Ave in Buffalo. Mesque is my favourite cocktail bar in Buffalo. We only “discovered” it 2 years ago, although it’s been there for as long as I remember. It is just easy to miss, as it’s known as a soccer bar…I don’t know about you, but I don’t expect a soccer bar to have high end cocktails, I expect it have beer and cater to fans of Man U et al. But I was wrong, very very wrong. They have a rotating seasonal cocktail menu featuring some very creative drinks. One of their previous fall drinks was an Indian masala spiced drink, and one of their spring drinks featured peas. And it was amazing. I finally tried a Bloody there, because I saw it advertised as one of their game day specials ($7.50 on a Match day, $8 normally). The bartender and GM, Dylan, came to Mesque from Panorama on 7 who won this year’s Buffalo Bloody Mary Fest, so I knew it would be a good drink. (Panorama was my pick as #1 this year, and I enjoyed their drink when I had it in the restaurant. Sadly, Panorama kept Dylan’s plaque!) The drink was very spicy and heavy on salt and pickle, maybe a bit too much for some, but a nice outing.

We did some traveling in September, visiting my friend and former roommate in her new digs in Portland, Maine, and taking a few days to go to Orlando for Universal Studios. Florida didn’t turn up any Bloodies (who wants to drink a tomato cocktail in 95 degrees, sitting by a pool?), but I managed to find one in Portland. Nosh was right across the street from our Airbnb, and open late, so we stopped in one night for a snack and cocktail. Garnished with lemon and lime, I found some olives at the bottom. The spice level was mild, and relied on fresh cracked pepper. Nothing special, not bad. Just a basic, classic bloody.

Portland was very cool, and pretty hipster-y, so I was surprised at the lack of bloodies at the places we went. I thought they’d be all about sticking lobster claws in tomato juice! I was even willing to get one, considering I don’t like lobster, and I don’t like my food looking like the animal it used to be. Haha. Missed opportunity Portland!

So that cleans up my back log of cocktails (for now). I do have 2 gifted mixes to get to, and I will aim for next weekend. I feel bad that I haven’t talked about them yet, like I’m taking advantage of these companies. I assure you, I intend to talk about them in a timely manner, I just suck, as I said.