My dear friend Tammy saw me complaining on Facebook about having lost the Tomato Lime Cocktail tea I bought from Teavana, so she bought me a whole big container of it for Christmas. 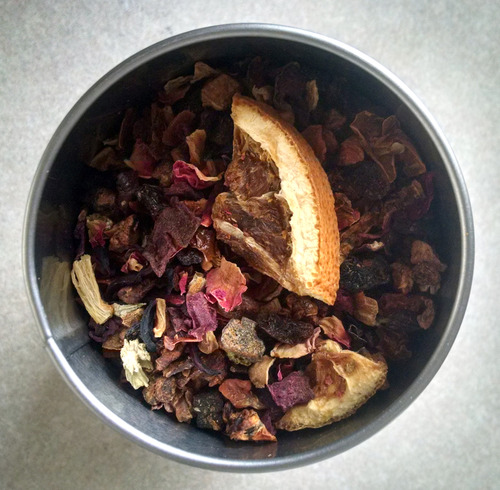 The loose tea smells quite good, but not at all like a Bloody Mary or tomatoes, where the Numi brand definitely smelled like tomatoes. This smells more fruity, and as you can see it’s full of big pieces of dried oranges. It brewed into a deep red color, like beets. The brewed tea does not smell as good as the loose tea. It has a very sweet fruity smell with a weird faint underlying vegetable/dirt smell (perhaps it’s the beets again). It’s made me scared to drink it.

Ok it’s not bad. But it is not at all tomato-y or any kind of vegetable-y. I don’t even taste lime. It’s just weird. The over lying flavor is orange, apple and plum. Weird.

I think it might be better as an iced tea than a hot tea. But it does not at all taste like tomatoes, so if you want a tea that does, stick with the Numi.

A few months ago I stopped into Teavana to look around. I try to avoid going in there because I want to buy all of the teas. But if I’m at the mall, which is rare, I’ll get a drink to go and try not to look around too much so I can avoid temptation. However, I looked around, and I spotted a new tea on the shelf – Tomato Lime Cocktail. Hang on a second. I asked, is that a Bloody Mary Tea?? The girl explained that they had created a line of tea based on popular alcoholic cocktails, and yes, it was a Bloody Mary based tea. I had already ordered my tea to go, but I couldn’t not buy some to take home. So I bought a 1/4oz or so to take home, and it sat in my cupboard for a while – I wanted to find a special time to brew it and review it.

Now that I’m working an odd schedule I thought now was the time. Only I couldn’t find it. What?! I unloaded my entire tea cupboard (yes I have an entire cupboard full of tea), I looked in all my other cupboards, thinking maybe I misplaced it. I blamed my mom for throwing it out when she rearranged my tea cupboard while I was on vacation. It is gone. Poof. *Sadface* Of course, I could just go back to Teavana and buy more, but it was the Christmas season and I avoid all retail locations at all costs from Thanksgiving to mid-January, and I figured with my luck, they’d no longer carry it in store. So I was not about to brave the crowds just to find out they didn’t have it.

Also, I’m a bit terrified of it. How could it possibly be good?

While I was waiting for Christmas to end, I was at Wegmans looking at tea (shocker), and came across Numi Organic Tea, and their Tomato Mint flavor. They have a whole line of “savory” vegetable based teas, including fennel and curry carrot, which also sounded interesting. However those 2 were inexplicably expensive, while the Tomato Mint was cheap, so in the cart it went. 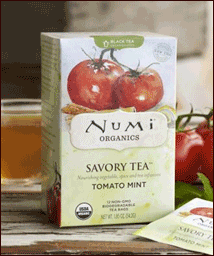 Admittedly I’m a bit afraid of this one too, but here goes! It definitely smells like tomato with a hint of mint. Like you’ve been harvesting the garden, and have a basket of produce in front of you. Smells quite good. And it tastes like tomatoes. Warm watery tomatoes. Hmm. I’m not sure if that’s a good thing. The mint is very very subtle, more in scent than taste. I suppose it’s not awful, it’s not offensive. I’m just not sure it’s something I’d want to drink frequently. Perhaps it would make a good iced tea. That will have to be put on the list to try.

(Now that I went to Teavana.com for the links, they have a 75% off sale which includes Tomato Lime. Oh no. That is not good news for the wallet! But perhaps I’ll have a review sooner than later.)