In the middle of last year my friend Cassie moved to Washington DC for a new job, and my first thought was 1. I should go to a Sabres/Capital game in DC some time, and 2. DC has a Bloody Mary Fest!! I had my first random vacation week booked for the end of April, and their Fest is some time in the spring, but I waited, and waited, and waited, and WAITED for them to announce the date hoping it was magically during the week I already had off, or if not, a week I could switch to, but I finally gave up and booked a flight to visit her. What takes them so long to figure it out?! Ugh.

But I wasn’t going to let the lack of a Fest deter me from having a selection of DC’s Bloody Marys. I asked the Bitches who Brunch on Twitter for recommendations, googled the hell out of it, and gathered a list of places to potentially try. First up was Founding Farmers.

The Bitches pointed me in the direction of last year’s Fest winners, which included Founding Farmers with their chicken and waffle garnish. Whaaaaat? Unfortunately when I tweeted the restaurant about the garnish, it was something special only for the fest, but their menu looked so good we went there for breakfast my first day in town before heading down to the Williamsburg area for the day. 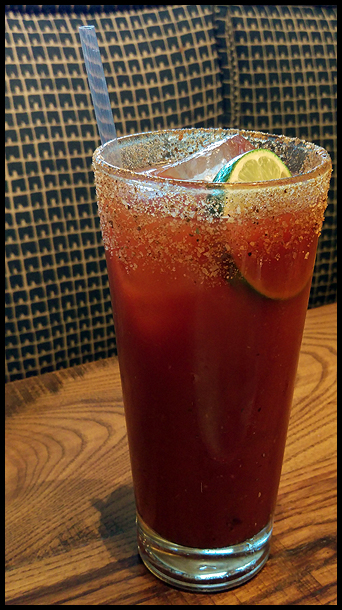 For $12, Founding Farmers bloody featured their house made mix with habanero infused vodka, and is served every day, not just for brunch on weekends. It took a little while for me to get my drink, our food had already arrived, but the waitress claimed it was because they had made a fresh batch of their vodka and she wanted to make sure I had the new stuff. Ok, cool. There was only a lime for garnish, with a spiced rim and visible spice in the mix. It was really delicious, a bit tart, a nice pepper taste, and a tiny bit of smokey habanero flavor. The heat level was purely from the infused vodka, with no hint of any vinegary hot sauce thankfully. Very good, I recommend it if you are in the area of one of their 3 locations.

After breakfast we drove to the Williamsburg area to try to see the load of giant President heads sitting in a field, which we failed at, and to visit the Historic Jamestowne site (not the Jamestown Settlement museum and reenactment site, which you reach before you get to the National Park, and probably tricks everyone like it tricked us. Luckily they gave us a refund when we realized we were not where we wanted to be. It’s probably a perfectly nice place to visit, but we wanted to see the actual colony that they are still conducting archeological digs at.)

Saturday turned out to be the big day – 3 drinks at 3 different places. We decided on trying the Evening Star in Alexandria for brunch, because their bloody features a bit of grilled cheese sandwich and bacon for garnish. The restaurant was really cute, decorated with all sorts of things made from erector sets, and fun shadow box “alternative art”. 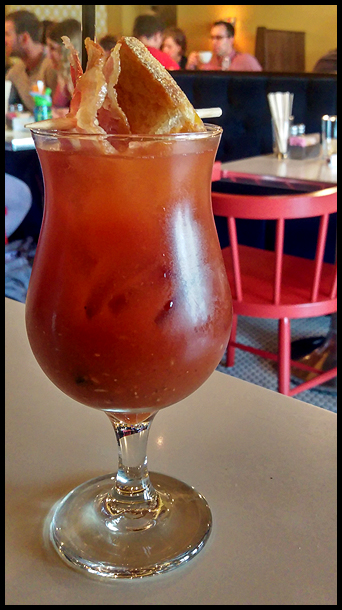 Costing $7, this bloody comes in a fancy little glass with their fun little garnish. I didn’t know how big the sandwich piece was going to be, but I thought it was fair, especially for the price (which I thought was fairly cheap.) Upon taking a sip I was immediately hit with pickle flavor, but while I’ve complained about strong pickle flavor before, it wasn’t bad. It was balanced nicely with the other flavors in the drink. There was a decent spice level, nothing overwhelming, and visible pepper in the drink. The garnishes were cold, but that was to be expected. 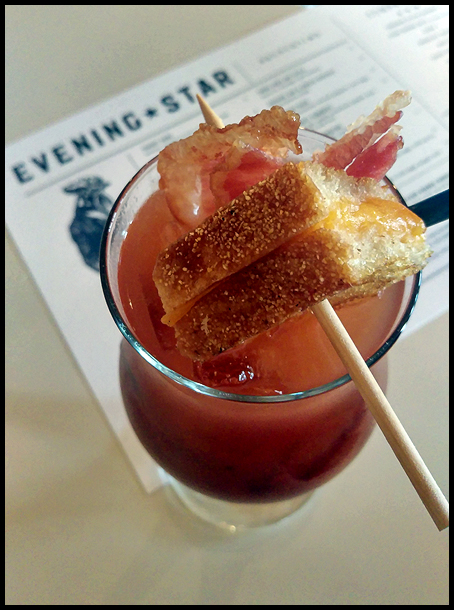 I enjoyed the drink, but I can’t really say the same for my breakfast. I ordered the breakfast burrito, which wasn’t at all spicy, was smaller than expected, and didn’t have much of any taste. It came with a salad, which is always a let down hahaha. I was hungry very quickly afterwards, but that turned out to be a good thing.

On the way to the restaurant we drove past Arlington Cemetery, and while the National Arboretum had been the goal for the day, we decided to visit Arlington as well. Very nice, solemn spot, and we had perfect timing to witness the changing of the guard at the Tomb of the Unknown Soldier. As a “newer” country, without a monarchy or anything like that, it sometimes feels like we don’t have much heritage or ritual, but things like the changing of the guard makes you realize that we do.

We started the drive to the Arboretum and looking at the map on my phone I realized we’d be driving right by one of the other bloody mary spots on my list – Buffalo and Bergen inside Union Market – and it was one of the ones with the most potential. I made Cassie detour to the market for me 🙂

Union Market was super cool, if not super hipster, with a ton of little food booths. So many choices that looked delicious, I’d definitely frequent the market if I lived near by. But this trip there was only one destination and one thing to be ordered – the Lox’d and Loaded Bloody Mary from Buffalo and Bergen. 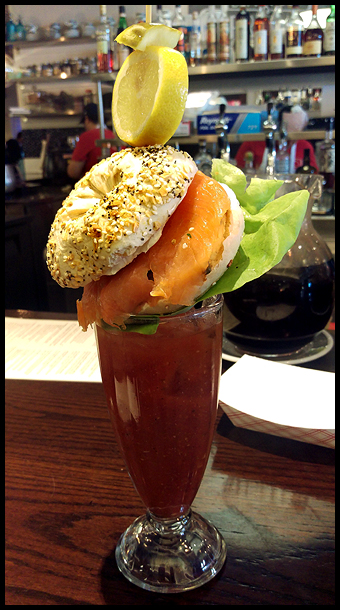 Oh holy Jesus, look at that bloody! A bloody mary with an everything bagel sandwich featuring cream cheese, onions, capers and a giant serving of lox, finished off with a lemon and pickle on top, and a large slice of lettuce underneath to keep the sandwich dry (brilliant!!) At $19.50, this is the 2nd most expensive bloody mary I’ve ever ordered but given the fact that the sandwich alone would have been $10.75, it was totally reasonable. After being overwhelmed by the sandwich (which was delicious – first time eating lox, and it was pretty good) the drink had a very spicy, fresh taste. It was clearly spicy from Frank’s hot sauce, which made it a bit too vinegar-y for me, but it was do-able because of a hint of horseradish and bit of pepper. Clearly the best garnish I’ve had in my bloody mary drinking career.

We finally made it to the Arboretum with an hour to explore, so we didn’t get to see that much, but it has a ton of potential for future visits. There are a lots of little paths into the various garden areas, plus with Cassie and I taking tons of photographs of the various flowers and plants, we’d really need all day there.

That night we went to Okra’s in Manassas to see Cassie’s friend play jazz, and since there was a bloody on the menu, guess I had to order it. Called the Proud Mary, it had no description in the menu, but I made sure it was actually a bloody, and the waitress said it was, but spicier. Game on. 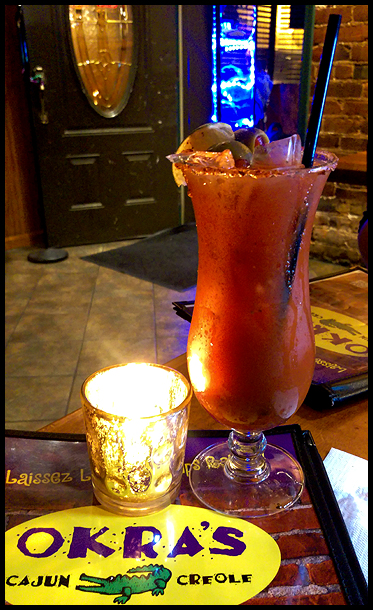 Garnished with 2 olives and a lime, it had a Cajun garlicky spiced rim. Served in a hurricane glass, the drink had a heavy celery taste, and was not too spicy despite what the waitress said. There was a lot of cracked pepper in the drink, and no vinegar taste. It was drinkable but fairly basic. I ordered the Pasta Diablo, which was delicious, and the jazz was good even though I know nothing about jazz haha.

Sunday we visited the Udvar-Hazy Air and Space Museum in VA, an extension of the museum on the National Mall, which features the Space Shuttle Discovery…!!!…Oh man, it was awesome to see the shuttle in person, plus other legendary air craft like the SR-71 Blackbird spy plane, which was ridiculous, and the Enola Gay, which dropped the first atomic bomb. 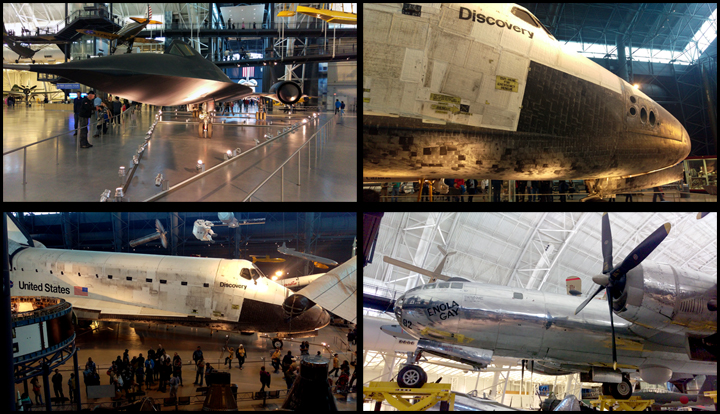 Monday I was on my own as Cassie had to work, but I made the most of it even if I didn’t get to have any more bloody marys. I began my day by visiting almost every memorial beginning at Einstein and Lincoln, and ending at Jefferson and Washington before crossing town to go to the National Zoo. According to my fitness tracker I took nearly 28,000 steps and walked 12 miles. I was just about dead by the end and happy to sit on a plane home, even if I did have to go through a torrential downpour to get to the car, including walking through a river to put my luggage in the trunk, and stepping into a virtual pond where the water was over my sneakers, filling them enough that I could pour the water out. BECAUSE IT WOULDN’T BE ONE OF MY VACATIONS IF I DIDN’T GET COMPLETELY SOAKED AT SOME POINT!!! 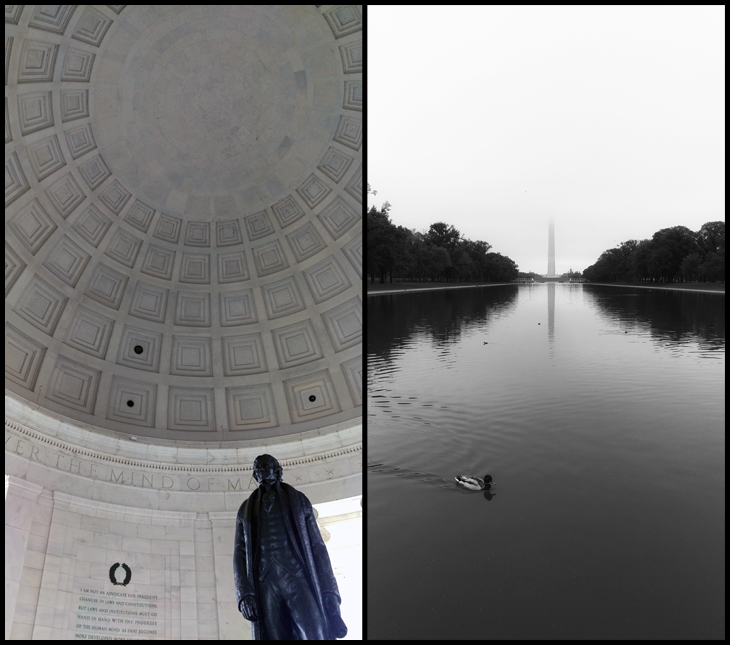 Jefferson Memorial, and Washington Monument in the mist. 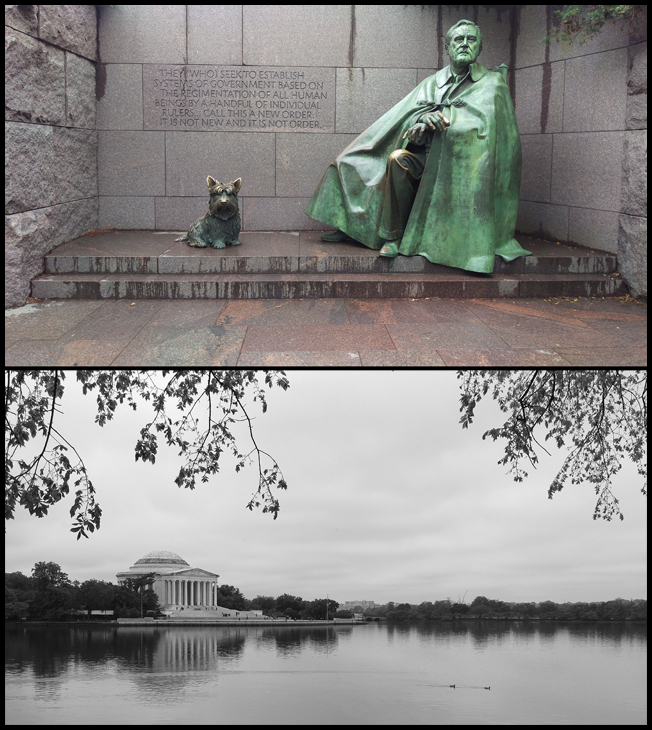 My fav president FDR, and the Jefferson Memorial

I had a great time visiting Cassie, and a few nice cocktails. I’d call that a successful trip.